The Latest Survey About Trump Isn’t Shocking at All 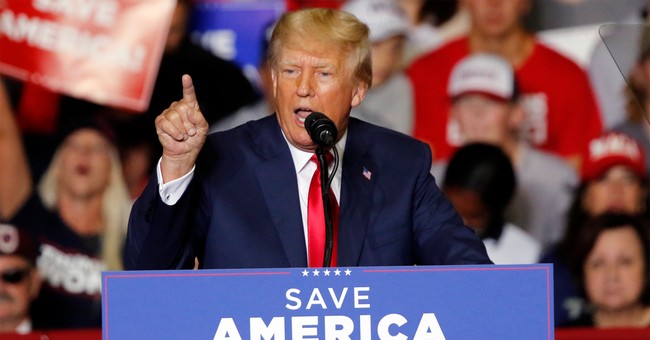 The political rise of Donald Trump is a multi-layered sponge cake soaked in irony. The more attention they gave him in 2016 in the hopes of derailing his candidacy, the more he rose in the polls. The media gave Trump nearly $2 billion in free media during that election. With every hit piece and politically motivated investigation, Trump either gains in strength or further solidifies his standing among the GOP base. It’s not that Trump has a default persona that makes him impervious—it’s that the media, along with the deep state, has gone so far off the reservation in their attempts to destroy him that their credibility is no better than a North Korean news agency.

With every new faux investigation, the Left’s ability to degrade Trump’s standing with Republicans shrinks to the point where it's beyond measurable. The FBI’s raid on Mar-a-Lago not only re-energized his supporters but potentially delivered Trump the 2024 Republican nomination on a platter. The latest poll on the former president is not shocking—his standing with his supporters remains unchanged, which is crucial regarding Trump’s 2024 intentions. With his base more united than ever in their indefatigable support for 45—he has a solid base to make another White House run (via NYT):

That level of Trump support has effectively been unchanged since the last Times/Siena poll, which was fielded in July amid televised hearings by the House committee investigating the Jan. 6 storming of the Capitol. It was also fundamentally similar to levels of support Times/Siena polls and other surveys found in recent years.

Mr. Trump has often boasted about the loyalty of his supporters. That loyalty has long been clear in his favorability ratings, which remained stable throughout his time in office, even during moments of peak turmoil, such as his first impeachment trial. His approval ratings rose briefly as Covid-19 started to spread in the United States in spring of 2020, but by May his support had returned to previous levels.

Many of Mr. Trump’s signature policy proposals have remained fairly popular among the public, the September poll found. Half of all respondents favored a wall along the U.S.-Mexico border, including more than 15 percent of those who said they would vote for Mr. Biden in 2024. And a majority said they agreed more with the Republican Party than with the Democratic Party when it came to illegal immigration.

The Trump base is among the most diverse and efficiently dispersed in modern political history. It's why Mr. Trump can remain competitive, even if his approvals range from mediocre to terrible. Yet, you also must wonder if the FBI and their Democratic Party allies planned to boost Trump to better position him as the 2024 nominee, making it easier for Democrats to win. Going off past 2020 exit polls, Trump’s two-to-five-point dip among white working-class voters in the rust belt proved fatal. The bet from Democrats is that the Trump coalition isn’t enough to win, but we’re talking an eternity between 2020 and the next election. Joe Biden presides over an economy in recession wracked with high inflation. I'd sit on the sidelines for those looking to challenge Trump, like Mike Pence or Mike Pompeo. We also see what he does to those trying to run against him. Ron DeSantis might become the exception, but for the lower tiers—it’s outright destruction.