Woke Nonsense Has Now Ruined the Act of Donating Blood 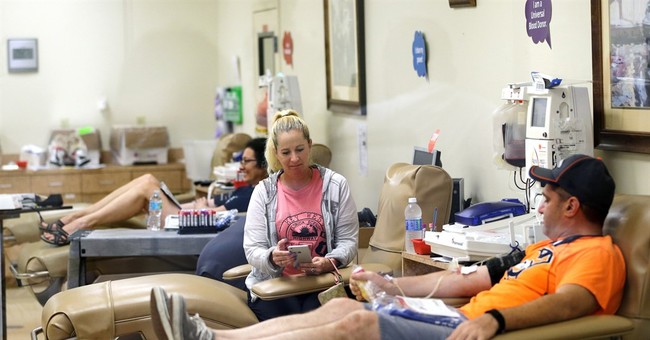 People donate blood. For one man, he’s been doing it for 50 years. He’s donated 125 pints of blood during his lifetime. That might have been put to an end after just one question on those surveys they hand out prior to sticking you with the needle. It’s irony at its finest. As the workplace moves to become more inclusive to accommodate the annoying and mentally unstable, they’ve barred people from doing simple acts—like donating blood apparently. The question asked if the man had been pregnant over the past six months. He protested over the question rightfully arguing it didn’t apply to him. He was then barred from completing his donation. This fiasco gets worse given how those who handle the blood drive responded (via Daily Mail) [emphasis mine]:

Mr [Leslie] Sinclair, 66, was told to fill in a form which asked whether he was expecting a child or had been pregnant in the past six months.

When he complained that as a man in his 60s this question did not apply and he should not have to answer it, Mr Sinclair said staff at the clinic told him they could not accept his blood.

The stand-off took place as NHS England launched a campaign earlier this week to recruit a million more blood donors over the next five years after numbers fell during the pandemic. The Scottish National Blood Transfusion Service (SNBTS) began a drive earlier this month to find 16,000 new donors in the coming year.

It emerged last night that all potential donors are asked if they are pregnant to 'promote inclusiveness' and because pregnancy is 'not always visually clear'.

Angry at the refusal to take his blood, Mr Sinclair walked away and last night told of his frustration at the 'nonsensical' decision.

The father of two, from Stirling in central Scotland, said: 'I am angry because I have been giving blood since I was 18 and have regularly gone along. I'm very happy to do so without any problem.

…Professor Marc Turner, director of SNBTS, said: 'We appreciate the support of each and every one of our donor community and thank Mr Sinclair for his commitment over a long number of years. Whilst pregnancy is only a relevant question to those whose biological sex or sex assigned at birth is female, sex assigned at birth is not always visually clear to staff.

Wait—they couldn’t tell if Mr. Sinclair was a man. Really? It’s not always “visually clear.” Fellas, take the “L” and just let the man donate his blood. If you look at the picture, it’s clear Sinclair is a dude. He’s not a trans-man or whatever the hell. There are also not that many trans people in the world. Stop. It’s not like you run into these people with hyper-frequency. Quit being morons. Men can’t get pregnant. That is a scientific fact. Anyone who thinks otherwise is mentally unstable, a moron, a drug addict, or an ungodly mixture of the three.

‘We can’t tell who is who’ regarding gender is their defense. Maybe Sinclair should stop donating blood if this is the silliness he has to encounter every time.