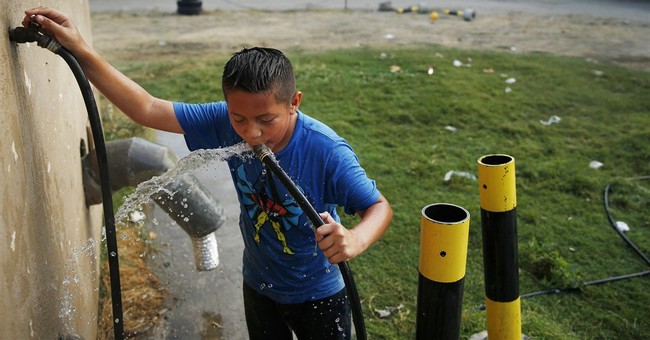 Does California have water police now? Not right now, but that could be coming. I will never be shocked about any news coming from California. If there’s any way to screw over the taxpayer or trample constitutional rights to satisfy some left-wing urge—they’ll do it. Now, the San Francisco recall is surprisingly good news. The uber-liberal city fired their soft on crime district attorney who is the spawn of two domestic terrorists, but I digress. The state is also known for two things every year it would seem: wildfires and droughts.

The Golden State burns, folks. And they never seem to have enough water despite being next to the Pacific and having the political resources to pass bills to fund desalinization projects. It’s how the Saudis survive. It’s how Israel has a water surplus right now. Water consumption in the state is always a news topic around this time. And now, one water district is doling out restrictors to curb usage (via ABC 7):

Customers who were warned and continued to use more water than was recommended are getting these installed.

The flow restrictor device is about the size of a half dollar with a hole in it.

Without a flow restrictor, water flows normally. Once it has been installed, a considerable amount of water is reduced.

Eyewitness News checked in with several water districts and on average, 70% of residential water usage is for outdoor lawns and plants.

Flow restrictors pretty much eliminate your ability to water anything outside.

Once this device is installed, it's there for at least two weeks while the customer works on conserving water.

Las Virgenes is the only water district ABC7 is aware of that's using this method - and its goal is for its customers to cut back on their water usage amid what's being called a historic drought.

Don’t tamper with it. It could cost you $2,500 according to ABC7. Yes, the drought the state is encountering is pretty bad. Yet, I’ll always find these sorts of regulatory measures creepy and overreaching.

Recommended
The White House's Stunning Response to the Death of More Than 40 Illegal Immigrants in Texas
Julio Rosas
Share this on Facebook
Tweet
California Lieutenant Governor Singles Out Justice Clarence Thomas As 'Saudi Arabian Father'
Rebecca Downs
Man Airdrops Something That Should NEVER Be Shared on a Southwest Flight
Matt Vespa
More Proof Biden Lied to the Country About His Business Dealings with Hunter
Katie Pavlich
CBS News Poll: New Low and Bad Vibes For POTUS, as GOP Racks Up New Voter Registrations