What's With All These Democrats Stroking Out All of a Sudden? 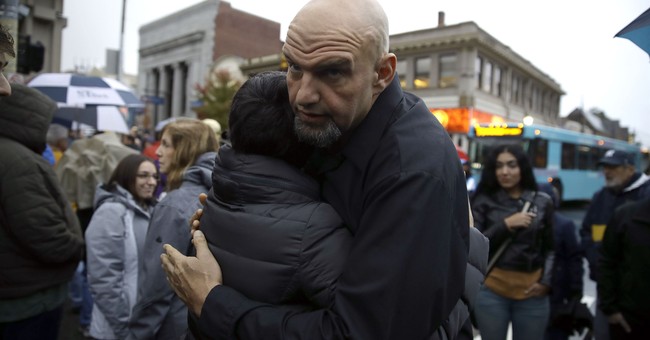 What is going on with the Democratic Party? I know they’re unhinged. They’re pro-baby-killing. They’re pro-crime. They’re pro-high inflation. They’re pro-high gas prices. Hey, I was told silence is violence. I was told inaction meant enabling. This Biden administration has done nothing and aren’t willing to do anything to address these domestic crises so—they’re for this self-destructive economic fiasco. Yet, you all know that. I’m talking about all these Democrats stroking out. Seriously.

Sen. Ben Ray Lujan (D-NM) has been out of commission for months. He suffered a stroke in January, and he says it’s a miracle he’s alive. It came just as Joe Biden nominated Ketanji Brown Jackson for the Supreme Court. It’s a 50-50 Senate. Losing Lujan caused something of a panic when this happened (via NYT):

When Senator Ben Ray Luján got out of bed at 6:15 on the morning of Jan. 27, the world was spinning.

“As soon as I stood up, it felt like vertigo,” he recalled in an interview in his Senate office, one of only a few the New Mexico Democrat has given since suffering a stroke that could have killed him. The stakes stretched far beyond him: News had just emerged that President Biden would have a Supreme Court nomination, and Democrats in the narrowly divided Senate would desperately need his vote to confirm a new liberal justice.

With Democrats holding the barest control of the Senate, the stroke threatened to do more than upend Luján’s life. If he weren’t able to return, the party might have needed to delay a vote on President Biden’s Supreme Court nominee, risking her confirmation.

“I need to get out of here,” Luján recalled thinking. “I need to be able to cast that vote, because in my head, I was the one that was going to prevent this from happening. And you didn’t want that on your shoulders, right? That was bad for the country.”

He said he was “very proud” to cast his vote for Ketanji Brown Jackson, who will become the first Black woman to join the Supreme Court, only a few weeks after leaving the hospital.

Luján is an increasingly rare figure in a polarized Washington. He’s universally known in the Senate as a kind and thoughtful colleague, someone who builds relationships with adversaries, seeks out bipartisan projects and gives a cheery hello to everyone he passes in the hallways.

Lujan says he’s 90 percent recovered. Now, with key primaries being held today in states like Pennsylvania, the man who could be the US Senate candidate for Democrats, John Fetterman, has had a stroke. He’s now having a pacemaker implanted (via USA Today):

“John Fetterman is about to undergo a standard procedure to implant a pacemaker with a defibrillator. It should be a short procedure that will help protect his heart and address the underlying cause of his stroke.. (A-fib), by regulating his heart rate and rhythm,” campaign says

#Campaign2022 ALERT: Aides say @JohnFetterman is getting "a pacemaker with a defibrillator. It...will help protect his heart and address the underlying cause of his stroke, atrial fibrillation (A-fib), by regulating his heart rate and rhythm." #PASEN pic.twitter.com/KSZrN0sqTa

Pennsylvania Lt. Gov. John Fetterman, the leading Democrat in the state’s high-profile Senate contest, has suffered a stroke but is on his way to a “full recovery,” his campaign said on Sunday.

Fetterman, 52, said in a statement that he wasn’t feeling well Friday and went to the hospital at the urging of his wife.

“I had a stroke that was caused by a clot from my heart being in an A-fib rhythm for too long,” Fetterman said in a statement. He said the doctors were able to remove the clot, “reversing the stroke,” and got his heart under control.

“The good news is I’m feeling much better, and the doctors tell me I didn’t suffer any cognitive damage,” he says in the statement.

The stunning revelation, which comes just two days before Pennsylvania’s primary election, creates deep uncertainty for Democrats in a state that represents one of their best Senate pickup opportunities in the nation.

Fetterman said he will stay in the race.

Oh, and the stroke train hasn’t stopped in Pennsylvania—it made a stop in Maryland. Sen. Chris Van Hollen suffered a minor stroke recently. This has shed a light on one of the nation’s top health risks, according to The Wall Street Journal:

Two politicians are recovering from strokes suffered in recent days, highlighting the risk from a leading cause of death and disability in the U.S.

Stroke is the fifth leading cause of death in the U.S. and a major cause of disability, according to the Centers for Disease Control and Prevention. More than 795,000 people in the country have a stroke each year, the agency said.

Stroke death rates have declined for decades, but mortality rates from heart disease and stroke increased some 4.3% and 6.4% respectively in 2020, according to a recent study in JAMA Network Open. Many people were unable or unwilling to seek medical care in the earliest days of the Covid-19 pandemic, and many people have been under unusual amounts of stress or haven’t been as active or kept up with medical routines. Some studies also suggest that Covid-19 might increase the risk of conditions such as heart disease and stroke.

Of course, we wish speedy recoveries for all, but this is not a trend you want to see.