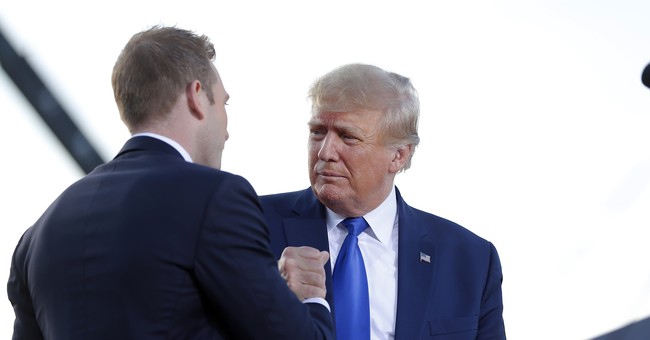 If this is true, and it probably is, then it perfectly fits with a particular characteristic of this Biden White House. They're awful at crisis management. They're awful at prioritization. The Afghanistan withdrawal fell apart. Americans were trapped. Joe Biden then delivered a speech about…COVID vaccinations. It's as if he feels that since he's president, these crises will just resolve with time. Only someone who isn't mentally capable has that thought process. You can't just wish things away.

Leadership is more than delivering a speech, Joe. You're not a good president. We all know that—but holy hell, we weren't expecting you to be this incompetent. Everyone around you sucks. And not by a little bit—by A LOT. Your vice president has a case of the giggles every time she's in front of the camera, spews word salads, and has a work environment so toxic that all her staffers are running for cover. Your cabinet secretaries don't do anything either. No one wants to tackle the energy crisis because that would mean increasing domestic oil and gas production, which will upset the progressive left of the base. You don't know what to do about inflation. You thought it was transitory. Remember that? So, you kicked your feet up and hoped time would solve the issue.

Meanwhile, scores of America's working families have seen their paychecks get smaller and smaller. And if you allocated the time and resources that you devoted to coming up with the term "ultra MAGA," maybe we could be closer to solving this mess. Instead, all you did was basically give the GOP a badass name for the base. Oh, and the journey for Biden in coming up with this moniker is hilariously tragic…sort of. Maybe you could be second-hand embarrassed by it. I would be since it took…six months of research. I'm not kidding. Also, the White House tried to say that Biden came up with this term on the fly during Psaki's May 10 press briefing, which is not true. Even without the resources allocated for this project, Biden is too slow to come up with this (via WaPo):

Biden’s attempt to appropriate the “MAGA” brand as a political attack was hardly accidental. It arose from a six-month research project to find the best way to target Republicans, helmed by Biden adviser Anita Dunn and by the Center for American Progress Action Fund, a liberal group.

The polling and focus group research by Hart Research and the Global Strategy Group found that “MAGA” was already viewed negatively by voters — more negatively than other phrases like “Trump Republicans.”

In battleground areas, more than twice as many voters said they would be less likely to vote for someone called a “MAGA Republican” than would be more likely. The research also found that the description tapped into the broad agreement among voters that the Republican Party had become more extreme and power-hungry in recent years.

“All of that extremism gets captured in that brand,” said Navin Nayak, president and executive director of CAP Action Fund. “We are not trying to create a new word. This is how they define themselves.”

Nayak also said “MAGA” is a versatile epithet, allowing Biden and the Democrats to convey the same message whether they are talking about the economy, climate change or abortion.

Biden's attempt to reappropriate "MAGA" and "ultra MAGA" was the result of a six-month research effort by liberal groups. My latest w @michaelscherer. https://t.co/foVeidRgZn

This was a colossal waste of time. Biden and his party are destined for defeat in November. Forget the leak at the Supreme Court where a draft of the Dobbs opinion has the Court overturning Roe v. Wade. Democrats are going to lose the House and maybe the Senate.

Only woke white women on social media care about abortion. Other normal American female voters care about inflation, gas prices, the grocery bills becoming more expensive, and, you know—feeding their families. On all those fronts, Biden has failed. The economy is lurching toward a recession, which is Biden's fault.

Still, Biden doesn't believe the polls. He's said that, which partially explains this endeavor. Also, of course, the most left-wing think tank, the Center for American Progress, would have such an analysis about the MAGA voters.

These people beat the Clinton machine. And with the pandemic dying out and things returning to normal, they can easily boot Biden. It's May. November is a long way off—and there are plenty of things that can go wrong for Biden to make this little research project seem ever more ridiculous and a waste of time. It's going to happen. Everything that can go wrong for Biden has gone wrong. I just can't believe "ultra MAGA" was a six-month project.

Priorities, do you know them, old man?