Oh, So *They* Can Say an Election Was Stolen, But We Can't 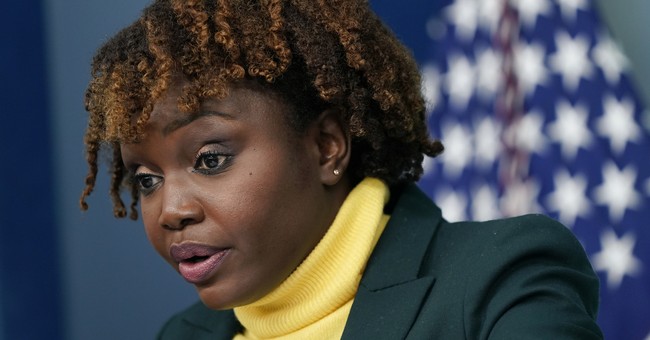 As we all expected, Jen Psaki is out as White House Press Secretary. She’s been kicked in the teeth long enough. It’s not just her. EVERYONE in this position gets the snot kicked out of them dealing with the White House press corps—or at least that’s how the story goes. You take heat for 12-18 months or so and then get your fancy corporate job. Psaki is going to MSNBC which is a lateral move, no different than what she does now. what is shocking is her replacement: Karine Jean-Pierre. She’s the worst. There was chatter that the reason why Psaki stayed on longer was that Karine was just bad dealing with the media. The deputy press secretary bench is like the New York Knicks—abjectly awful. The press is hyping up that she’s the first black lesbian to hold the post. What they’re burying is that she’s an election truther and might not be very friendly to Israel.

Let’s go to the past tweets. Seriously, guys—you didn’t think this would be an issue when or if the time came to elevate her?

So, these people can say an election was stolen, but we can't because--oh, that's right. We're not Democrats or insane people. It's the two separate rules protocol. It's nothing new. Isn't this inciting an insurrection? I thought that was a rule too? Also, we all know Gov. Brian Kemp won the Georgia gubernatorial race by some 50,000 votes. That is a fact, except in liberal circles.

And she didn’t want Democrats meeting with American Israel Public Affairs Committee (AIPAC) because those Jewish people are “severely racist” (via NY Post):

The bipartisan gathering has long been an uncontroversial part of American public life, but in recent years has become more divisive as Democrats have drifted away from America’s closest ally in the region over the unresolved Israel-Palestinian conflict.

In the piece, she blasted the conference as “severely racist” saying it has “become known for trafficking in anti-Muslim and anti-Arab rhetoric while lifting up Islamophobic voices and attitudes.”

“You cannot call yourself a progressive while continuing to associate yourself with an organization like AIPAC that has often been the antithesis of what it means to be progressive,” she added, while also taking a shot at Israeli Prime Minister Benjamin Netanyahu.

I mean, she’s a member of the far-left. The American Left has an anti-Semitism problem. These people hate Israel. What else is new. This White House is a pile of hot garbage. Its communications team is a mess. Its press team is a circus. It’s par for the course—and we haven’t discussed how Karine’s partner is a reporter for CNN. This is a train wreck waiting to happen.