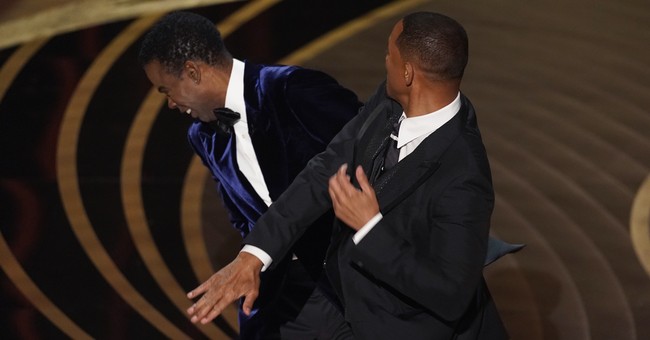 Brandon Morse had this on RedState first. It’s the slap heard around the world. Will Smith was the Oscars on Sunday night. Chris Rock made a joke about Jada Pinkett Smith’s bald head. Jada is suffering from Alopecia. Smith is seen laughing in one frame and then he storms on stage and slaps Chris Rock. Rock handled the chaos with professionalism as Smith hurled obscenities at him from his seat. It was an awkward moment. The actor would later take home the Oscar for Best Actor for his performance in King Richard. Will he have to give it back? Was this all staged? Who knows? I don’t think it was—and Smith has since apologized to Rock for making a total fool of himself. It was just an all-around strange moment. During a commercial break, Tyler Perry, Bradley Cooper, Smith’s publicist, and Denzel Washington all were seen talking and comforting Smith.

A two-time Academy Award winner, Washington was told Smith something that he mentioned in his acceptance speech which struck a chord with the actor (via Page Six) [emphasis mine]:

During the commercial break, Will Smith is pulled aside and comforted by Denzel Washington and Tyler Perry, who motion for him to brush it off. Will appears to wipe tears from his eyes as he sits back down with Jada, with Denzel comforting Jada and Will’s rep by his side. pic.twitter.com/uDGVnWrSS2

The entire Will Smith moment went to air uncensored in Australia: pic.twitter.com/qG8WL7DEub

Denzel Washington and Bradley Cooper were seen comforting Will Smith at the 2022 Oscars after the “King Richard” star slapped Chris Rock over a joke he made about his wife, Jada Pinkett Smith, being bald.

Smith confirmed during his Best Actor speech that Washington told him, “At your highest moment, be careful — that’s when the devil comes for you.”

It seems that Smith needed to be calmed down further after Washington’s pep talk, because Cooper was also seen chatting with Smith during the break.

Although the “Independence Day” star and Washington have never starred in a film together, he considers the Oscar winner a longtime friend and mentor.

In February 2022, Smith told People that Washington told him, “This is your year.”

“He knew me years ago, I would go to Denzel for advice so he’s seen me through the years and he was just telling me how proud he is of who I’ve become and what I’ve become,” the “Wild Wild West” star added. “He was saying that he felt like a weight was lifted off of his shoulders somehow.”

Okay, well, Wild Wild West is one film Smith probably wishes he could just forget. Yet, I’ll let Morse explain why Washington is a great role model for actors in Hollywood, and for these moments:

Much will be said of Smith’s assault on Rock over a joke, including on this site, but Washington seems to be a man who deserves to be listened to. He’s never been one to shy away from his faith in God and his work shows this. He played Eli in the Book of Eli, the story of a man who crosses the post-apocalyptic United States protecting the last Bible in existence. He’s also made a Christian film of his own called A Journal for Jordan. The movie centered around a military father who died while overseas, but left a journal for his son to read that contained lessons about life, many of which were inspired by the Bible.

Washington openly talks about when he gave his life to Christ, making him one of the few people in Hollywood willing to do so.

“I went to church with (Hollywood director) Robert Townsend, and when it came time to come down to the altar, I said, ‘You know, this time, I’m just going to go down there and give it up and see what happens.’ I went in the prayer room and gave it up and let go and experienced something I’ve never experienced in my life,” recalled Washington.

He’s also a big advocate for men in a day and age where masculinity is frowned upon and thinks that men’s natural aptitudes for strength, leadership, power, authority, guidance, and patience are gifts from God.

It may be that Denzel saw a man in pain and, believing that Smith needed that kind of guidance in his life, offered it to him in a moment of deep turmoil. Smith has been openly emasculated by the very wife he defended with physical aggression on the Oscars stage, and even made excuses for her cuckolding him by saying him allowing it is the “highest definition of love.”

Smith’s personal life is clearly out of control and his wife is likely at the center of it.

For sure, Jada is at the epicenter of this—all of this chaos was over her reaction to the joke. Second, this couple has endured worse regarding their unusual marriage arrangement. Third, you’re both celebrities. Getting made fun of is part of the job—and it was not like Rock said this with malice. Get a grip and get over yourselves. Somehow assaulting a man for a bad joke is considered chivalrous with some on the Left. The ‘words are violence’ crowd really is digging actual violence. Also, I thought it was now sexist to open doors for women. The feminists don’t like that, but somehow the same camp is endorsing assault and battery over a joke about a man’s wife? These rules are nuts, and that’s by design. Leave it Denzel to cool the temperatures though.

This was probably the most unhinged Academy Awards in a long time.