Here Are the Two Congresswomen Who Heckled Biden Relentlessly 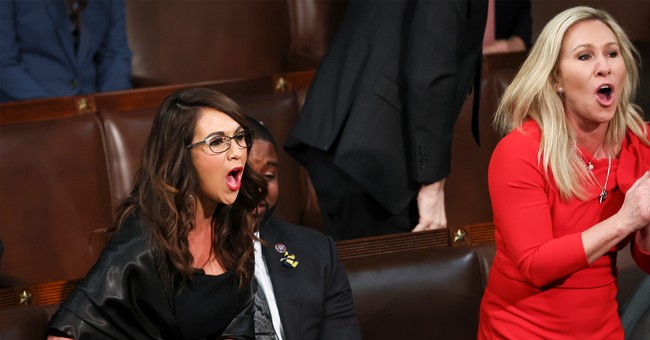 Reps. Lauren Boebert (R-CO) and Marjorie Taylor Greene (R-GA) were the all-stars last night. They made a disorganized, sloppy, and messy State of the Union entertaining. They also weren’t going to let Joe Biden get away glossing over the truth. They heckled him. It probably triggered liberal America, but they should know by now they don’t care what you think about them. They will also be disruptive when need be and ruffle feathers. This is why they were sent to Washington. They will not be silent women. They shouted “build the wall” and reminded Biden that 13 soldiers were killed during his chaotic and ignominious exit from Afghanistan when he tried to gloss over that disastrous moment for his administration (via NBC News):

From the audience: "13 of them!" pic.twitter.com/RS3Qfhhi7a

Greene was heard grumbling through the entire part of Biden's speech about Covid policy before she shouted a remark about women's sports when Biden mentioned new laws targeting transgender Americans and their families.

Boebert and Greene tried to start a "build the wall" chant — a reference to former President Donald Trump's calls to construct a wall across the U.S. southern border — when Biden referred to securing the border and reforming immigration law.

But the moment that stood out most was when Boebert shouted "13 of them" — referring to the 13 U.S. service members who died in an attack in Afghanistan during the U.S. withdrawal last year — when Biden discussed battlefield conditions that may contribute to veterans' developing cancers "that would put them in a flag-draped coffin."

Boebert's remark came just before Biden mentioned that one such veteran was his son Beau Biden, who served in Iraq and died of brain cancer in 2015.

Her remark prompted some boos from fellow lawmakers.

But Boebert did stand and cheer for one of Biden's lines Tuesday.

Boebert leaped from her seat, clapping and shouting, "That's right!"

It added some much-needed zest to the night. The speech was almost as chaotic as the Afghanistan retreat to be honest. It was all over the place. We all know Biden suffers from diarrhea of the mouth, which came in the form of listing every left-wing action item, feasible and not feasible, within a 40-minute period. It was a stream of left-wing activist vomit, and it only showed that this president cannot get his priorities right. Biden’s agenda is a game of bumper cars. We’re bouncing around all the liberal things, and the man really doesn’t have the votes to do much. It’ll be even grimmer next January when the Republicans fully retake Congress.

Listen to today's episode of Triggered to get a special ONE-TIME promo code for 50% OFF a Townhall VIP subscription (valid until Friday, March 11)! You will get access to Triggered Uncensored, Matt's VIP columns, Kurt Schlichter's Unredacted podcast and Stream of Kurtiousness video series, and much more!