Ron DeSantis Just Owned the Liberal Media Again on COVID...And They're Probably Too Stupid to Notice 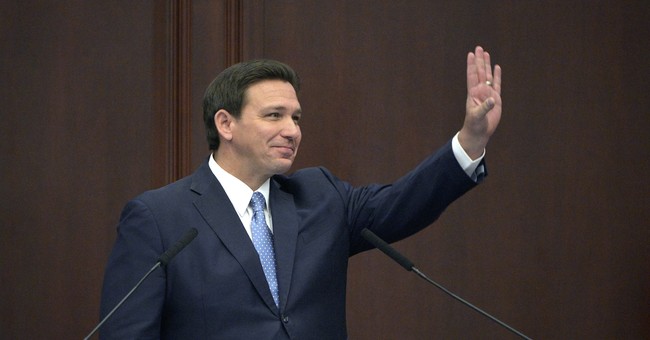 How many scalps does he own? How big is the trophy room? Florida Gov. Ron DeSantis has been smeared like no other Republican other than Donald Trump. When it comes to COVID and Florida, the man takes all sorts of fire because he doesn't abide by the panic porn peddlers in the liberal media and the so-called medical expert community that has been proven wrong time and again regarding this virus. The liberal Northeast was ravaged by Omicron. Those who escaped the initial COVID wave and Delta now contracted Omicron. These were the folks who "did everything right." They got vaccinated, boosted, and wore masks to bed. They still got it because this is an airborne virus, dear children. It's contagious. Just because you voted for Biden doesn't make you special. It does suggest you're a moron, but back to DeSantis collecting skulls.

It's something out of the film "Predator." For every liberal swipe, DeSantis takes it in stride. He dodges the hits, returns fire, and waits. Why? Well, because his initial point about anything is eventually proven to be correct. Trump owned the liberal media. DeSantis might be better. At the very least, he's just as good at running circles around these clowns. So, let's look at the latest DeSantis victory, where he said in August that COVID spikes might be a seasonal thing—you know, akin to cold and flu season. The experts said that was misleading because…DeSantis said it.

Journalists: If you are smart and your reputation matters to you, stop trying to “fact check” @GovRonDeSantis. You can express disagreement with him, but don’t assert that he is factually incorrect — because it will backfire, and you will just end up looking like a stupid hack. pic.twitter.com/VTo5FSQ4Ew

“This is our covid season,” the Republican governor told reporters last week when asked about the state’s record-breaking surge in infections. “We thought we would see an increase. I don’t know that we thought we would necessarily see this many positive tests.”

DeSantis has argued that the recent record-breaking rise in new coronavirus cases and hospitalizations was unavoidable as temperatures rise and more people gather indoors, denying that easing restrictions and an uptick in tourism led to the surge.

But the claim that the time of year has a greater impact on transmission than mitigation measures such as mask mandates and social distancing contradicts guidance from researchers and public health experts, who warn people should get vaccinated and take precautions amid the rampant spread of the delta variant in Florida.

That was August. It's now January, and what do the experts say now?

"Covid-19 may have seasons for different temperature zones, study suggests."

Covid-19 transmission may have seasonal spikes tied to temperature and humidity, increasing at different times of the year for different locations, a new study in the American Journal of Tropical Medicine and Hygiene suggests.

“We think covid may be becoming endemic, meaning that it will stay within the human population, but we will see spikes based on where we are in a particular geographic point,” said author Antar Jutla, a hydrologist at the University of Florida. “The severity of peaks will be defined by how colder the temperature is and how warmer the temperature is.”

Jutla and his colleagues found that coronavirus cases in 19 hot spots worldwide increased above and below certain temperature and humidity thresholds because of human behavior and the virus’s movement as an aerosol. Case numbers spiked when air temperatures dipped below 62 degrees (17 Celsius) or above 75 degrees (24 Celsius). The virus also tends to linger more in drier environments compared to humid ones.

Owned. Owned. Again, DeSantis is just collecting the skulls of his victims, who are more concerned with damaging him ahead of the 2024 election than being accurate. These people don't know anything, yet they go after those who don't take their advice that gets debunked in a few months' time as gospel. I wonder why, right. It's not hard to figure out. These experts sold us the bill of goods that was mostly snake oil. The liberal media ran with it to boot Trump. The dividend is that no one cares, respects, or believes anything these people report. And why does DeSantis continually score wins against his enemies? It's not hard. He's a voracious reader of the medical literature on the subject, something comedian Bill Maher mentioned…last April. It's why Florida had a better vaccine rollout than New York. It's why Florida centered its initial efforts on vaccinating the most vulnerable, which was the elderly. Deep blue New York killed their elderly with Cuomo's nursing home order. Need I say more?

Leftists Are About to Kill Millions of People Right Before Our Eyes
Townhall
Andrew Follett says 'the media is telling you two major lies' about mass shootings and gun control
Twitchy
Barack Obama With the Worst Take of All Time on Uvalde
Redstate
Mass Shooting Facts to Shut Down Your Liberal Sister and Her Annoying, Man-Bunned, Non-Binary 'Boy' Friend at Your Memorial Day BBQ
PJ Media