The Real Reason Australia Deported Tennis Star Novak Djokovic...And It Had Nothing to Do with COVID 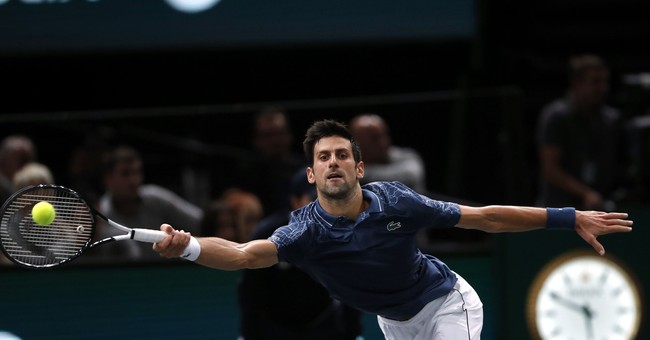 He’s number one in the world. He was looking to win his 10th Australian Open, but the Aussies booted him before he could take the court. I’m not the biggest follower of professional tennis, but I know the big names, and this was a total and complete circus. We’re talking about the deportation of Novak Djokovic who was probably the only unvaccinated player at this tournament. He recently tested positive. He has natural immunity to a virus with a 99 percent survivability rate. Also, Omicron is sweeping through Australia. The nation has been devoted to its ‘COVID zero’ policy that’s turned the land down under into a quasi-police state. There’s monitoring of citizens’ activity. There are COVID concentration camps. It’s insanity. There’s a reason why some are wondering if we can even consider Australia a western democracy since they’ve adopted measures that are more commonly seen in North Korea. The borders were shut down, and yet—COVID still found its way.

If you didn’t know any better, you’d think Djokovic committed first-degree murder. He was detained. Then released, then detained again as his visa was revoked, granted, and revoked again (via NYT):

The day before the Australian Open was set to begin, Novak Djokovic, possibly the greatest tennis player of all time, ran up against a group of determined opponents that no amount of talent, training, money or willpower could overcome.

He lost his final bid to stay in Australia on Sunday when a three-judge panel upheld the government’s decision to cancel his visa.

More broadly, he lost to a government determined to make him a symbol of unvaccinated celebrity entitlement; to an immigration law that gives godlike authority to border enforcement; and to a public outcry, in a nation of rule-followers, over what was widely seen as Mr. Djokovic’s reckless disregard for others, after he said he had tested positive for Covid last month and met with two journalists anyway.

“At this point, it’s about social norms and enforcing those norms to continue to get people to move in the same direction to overcome this pandemic,” said Brock Bastian, a social psychology professor at the University of Melbourne. “In this culture, in this country, a sense of suddenly upending those norms has a great cost politically and socially.”

The chief justice, James Allsop, announced the decision just before 6 p.m., after explaining that the court was not ruling on the merits of Mr. Djokovic’s stance, or on whether the government was correct in arguing that he might influence others to resist vaccination or defy public health orders. Rather, the court simply found that the immigration minister was within his rights to cancel the tennis star’s visa for a second time based on that possibility.

Just a few days earlier, Mr. Djokovic’s lawyers had won a reprieve from his first visa cancellation, hours after his arrival on Jan. 5 at Melbourne’s airport. As of Friday morning, he seemed to be on his way to competing for a 10th Australian Open title and a record-breaking 21st Grand Slam. But that initial case had never reached beyond procedure, focusing on how Mr. Djokovic was treated at the airport as border officials had held him overnight.

In the second round, his lawyers argued that the government had used faulty logic to insist their client’s presence would energize anti-vaccination groups, making him a threat to public health. In fact, they argued, anti-vaccine sentiment would be aggravated by his removal, citing protests that followed his first visa cancellation.

“The minister is grasping for straws,” said Nicholas Wood, one of Mr. Djokovic’s lawyers. The alternative scenario — that deportation would empower anti-vaxxers — “was not considered,” he maintained.

Meanwhile, as Australia flagellated the tennis star, Omicron, like everywhere else, is present and spreading. What are authorities doing about it? nothing. They’re letting it ‘rip through' the country, so what are we doing here again with the hysterics over the COVID vaccine besides wanting to demonize the number one tennis player in the world. The truth is that the Australian government didn’t want Novak to be an “icon of free choice.” That’s why he got the boot.

And the court agreed that this is indeed too risky.

A kangaroo ?? court in a banana ?? republic.

He has since returned to Serbia, though he cannot go to Australia for a period of three years (via Reuters):

Novak Djokovic returned to a rapturous welcome in Serbia on Monday after Australia deported the world men's tennis No. 1 for being unvaccinated against COVID-19, a stance jeopardising his quest for a record 21st Grand Slam title.

Most Australians had wanted him gone, but Serbian fans cheered and waved national flags as Djokovic touched down at Belgrade airport then headed to his own apartment.

"You are our champion, Novak!" and "We love you, Nole!" they chanted, using an affectionate diminutive.

And now, Djokovic’s entry into the French Open is also in jeopardy as the country passed a COVID passport law.

COVID is here to stay. It’s endemic. Omicron is mild. Everyone is going to get it eventually. We need to start calming down from all this nonsense because it’s not going away—which probably makes the political class salivate as it means endless emergency powers. We’re going to keep freaking out over a virus that’s mutated itself into a pathogen that’s remarkably not different from any other virus we face every winter.