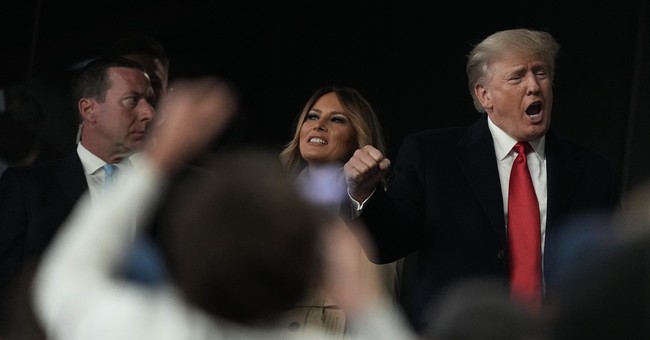 Liberals are without principles. They just like to whine. I know a lot of you already know that but here is a rather explicit example. Operation Warp Speed is Donald Trump’s signature domestic achievement. It gave us three vaccines against COVID. It’s something that was given to the Biden folks. It’s Trump’s vaccine. Period. That is a fact. So, what does the liberal media do? Well, they find a way to trash it. Oh, and thread the needle to blame the latest Omicron variant on Donald Trump. Tim Graham of the Newsbusters found the Politico piece that really went there with that garbage take (via Newsbusters):

Joe Biden has been president for more than ten months, and the Omicron variant has only been news for a few days. But somehow, Politico energetically found a way to blame Omicron infections on Donald Trump! Health reporter Erin Banco found conveniently anonymous experts to slam Trump (no partisan or ideological affiliations attached, so clean).

Despite a series of high-level internal conversations and discussions with the World Health Organization in 2020 about the danger of limiting lower-income countries’ access to the shot, including the emergence of new, more dangerous variants, the Trump administration did not develop a strategy for helping the rest of the world access the vaccine or develop the infrastructure needed to administer vaccines. Instead, it raced to secure as many of the world’s components needed to manufacture a vaccine as possible, cutting other countries out of the supply chain, and quickly scaled up manufacturing of a Covid-19 vaccine to deliver to the American people — not to the global population.

The president “did not see helping other countries as a priority,” said one carping anonymous source. "“If anything, the message inside the White House was to disengage from the world community and deflect blame."

NEW: Here's how the Trump administration's push to develop the vaccine first and keep the shot within the U.S. hindered the global fight against Covid-19.

A reflection on how we got to Omicron.https://t.co/zLxoJ16RYX

So, we shouldn’t have had a vaccine then? Our people first—that’s not a hard concept to understand when it comes to getting the shot. Only a liberal would want more American deaths from COVID. The 35,000-foot take here is that the Left is just COVID-obsessed. They want panic. At the end of this, they want 2020 election conditions where absentee ballots and mail-in voting can give Democrats the advantage again. They seriously don’t like that things are getting better, lockdowns are over, and mask mandates are going away. Also, they want a vaccine mandate but are mad that Operation Warp Speed gave us one. We’re dealing with children, folks. No, it’s the mentally ill. Liberalism is brain cancer—and you don’t need to engage with them anymore. They were once ok to be around, and now they’re scumbags.

I guess we shouldn’t be shocked that Omicron has been weaponized by the liberal media in order to blame Trump, but wow—did they have to manufacture some quality nonsense to do it.