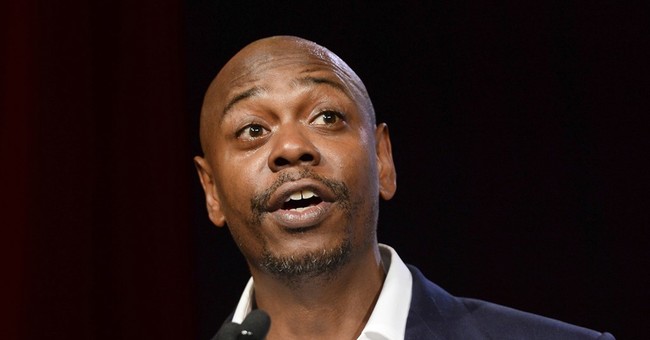 Dave Chappelle did what any alumnus does—he went back to his alma mater. He was in Washington, DC, at the Duke Ellington School of the Arts, where nearly 600 students packed the auditorium. Chappelle has become public enemy number one because he's funny. To the left, he's a transphobic and homophobic bigot. He's not—and he's certainly not going to apologize for his stand-up. Yes, some students voiced their disgust over his visit, which he quietly slapped down. Truth be told, the kids who were vocal really had no clue what they were talking about (via Fox News):

Comedian Dave Chappelle made a surprise visit to his alma mater in Washington, D.C., where some students reportedly expected him to apologize following blowback over his popular "The Closer" comedy special on Netflix this year.

"I'm 16 and I think you're childish, you handled it like a child," a student said, adding that Chappelle is a "bigot," Politico Playbook reported Thursday after speaking to attendees of the event.

"My friend, with all due respect, I don’t believe you could make one of the decisions I have to make on a given day," he responded, according to students recounting the event.

Politico reported that he responded to another antagonistic question from a student: "I’m better than every instrumentalist, artist, no matter what art you do in this school, right now, I’m better than all of you. I’m sure that will change. I’m sure you’ll be household names soon."

"Your comedy kills," another student shouted at him.

Chappelle spokesperson Carla Sims did not immediately respond to Fox News’ request for comment on the event. She told Politico, "They are complaining that he talked and said the n-word. If anything, Dave is putting the school on the map."

"He said these kids deserve an F for forgiveness," Sims added, saying he did not expect students to want him to apologize during the visit. But "give them some space to grow. They are going to say things that are immature."

A Duke Ellington official added that the comedian encouraged students who took issue with his comedy to ask him questions, and about eight students came forward.

Dave will say anything he wants to…because he can. Also, that's the total number of students triggered by Dave, or who had issues with his act: eight…eight? We fight hard against big tech censorship, especially on Twitter on First Amendment grounds—but the other side of this fight is that it's also not real life. This is another thing that Chappelle notes in his act. Liberal Twitter is insane, but it's not representative of the views of most Americans. It's not even close. It's something that businesses and the Democratic Party grossly exaggerate. No one speaks like the college faculty. No one introduces themselves along with their preferred pronouns. As Americans, we all have much bigger fish to fry. There are more pressing matters. Those who do dabble in this woke nonsense are the elite, folks who have too much time and money and are always looking to cause trouble. In other words, it's rich, white liberals—who have ZERO business getting offended about what a black comedian says.