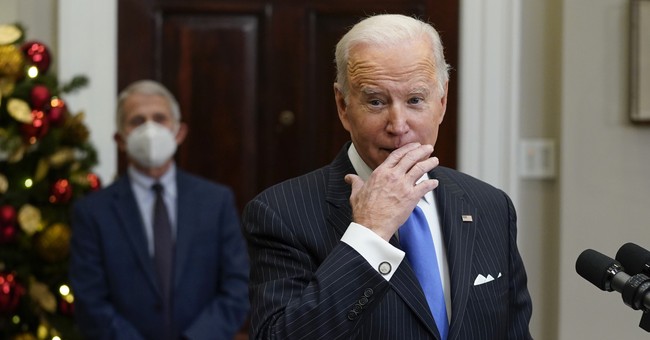 Joe Biden wants his COVID vaccine mandate. The problem is it might not be legal. The mandate has now been soundly beaten in the courts regarding its constitutionality. The workplace mandate has been halted. The Occupational Safety and Health Administration (OSHA), which was dragooned as Biden's medical Gestapo force, announced it was halting enforcing the protocols until the legal issues were resolved. The Biden mandate for businesses forces companies with 100 employees or more to have a vaccinated workforce. The Biden White House was unfazed by the rulings and even defied the courts, telling businesses to keep working on their protocols for compliance.

With health care workers, that mandate was halted in 10 states. Now, that's been expanded nationwide as a district judge in Louisiana decided to pump the brakes on this completely. If Biden wants his vaccine mandate, he'll have to get it passed through Congress (via Lafayette Daily Advertiser):

We will continue to take action to protect Arizona's health care heroes. pic.twitter.com/t6Y7cODVsk

A Louisiana U.S. district judge blocked a federal COVID-19 vaccine mandate for health care workers Tuesday, issuing a nationwide injunction in another setback to President Joe Biden's effort to require wide segments of the population to be vaccinated.

Doughty ruled on the lawsuit led by Republican Louisiana Attorney General Jeff Landry and joined by 13 other states, but Doughty added a nationwide injunction in his ruling.

In his decision, Doughty wrote the Biden Administration doesn't have the authority to bypass Congress in issuing such a mandate.

"If the executive branch is allowed to usurp the power of the legislative branch to make laws, two of the three powers conferred by our Constitution would be in the same hands," he wrote. "If human nature and history teach anything, it is that civil liberties face grave risks when governments proclaim indefinite states of emergency.

With Democrats having just a four-seat majority in the House and a split chamber in the Senate, this would be a bruising battle, one that moderate Democrats don't want as they would be made even more vulnerable for the 2022 midterms. Yet, that's not our problem. It's Biden's—and he's the grandmaster at being unable to solve anything that comes before him. The courts have spoken, Mr. President—your mandate is trash. Get back to the drawing board.