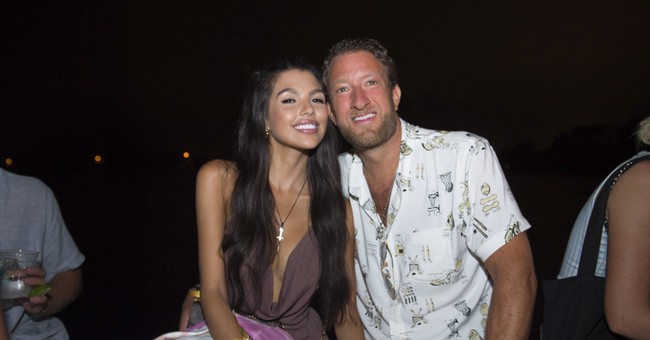 Barstool Sports’ Dave Portnoy is hated by the Left. He’s not ‘woke.’ He speaks his mind. He is not an advocate of PC culture. He’s everything that modern feminism despises—which makes him even more appealing. It’s also run by a woman now, Erika Nardini. It’s also a great American story. Barstool literally started as a few hundred pages printed out and distributed by Portnoy on the corner of a street. It’s now a media empire. Portnoy has been attacked for years. He’s proven that he can’t be canceled. He’s declared it as well, which surely infuriates the woke Left. So, they’ve tried again, with a shoddy hit piece about past sexual adventures. He’s allegedly into some rough sex. And? I’m waiting to see where there’s a problem. Nothing illegal is covered in the piece. It’s also behind a paywall. Oh, and it’s published by Business Insider, which was co-founded by a noted liar, Henry Blodget, who was convicted of securities fraud.

Portnoy went on Tucker Carlson’s show to speak about the matter, adding that this is character assassination. He’s vowed to wage all-out war against the publication which like Biden, has fled into the bunker (via Fox News):

Reminder I will go on any show that invites me on. I want to scream from the rooftops about what is happening here. This shouldn’t be political. Everybody should be outraged pic.twitter.com/MbGIk0SZGA

Business Insider dispatched a report Thursday with intentions of publicizing Barstool Sports founder Dave Portnoy’s unseen sex life which he explained on "Tucker Carlson Tonight" did not reveal anything newsworthy nor illegal.

Portnoy reacted to the hit piece with frustration, claiming the blog’s push for publication on the report that had been in the works for eight months was backed by sour intentions. According to Portnoy, Business Insider reporter Julia Black reached out to "every single person" attached to him for dirt.

"They found virtually nothing," he said. "There’s one incidence… I’m basically accused of going to a local cookie shop with a different girl every few days. So that is the gist of it."

Business Insider has also targeted Barstool’s advertisers on the matter, questioning their intent to support the media company. Portnoy said he’s offered to openly speak with the publication, yet they’ve refused.

"They won’t even discuss it," he said. "They print and run. It’s disgusting and it’s character assassination. My lawyers have said just let it go, it’ll go away. I’m not going to let it go… I’ve never been attacked like this."

Portnoy spilled that he finds it’s no coincidence the story was dropped on the same day Penn National Gaming earnings were released – the day before there was "wild shorting" on the stock. Penn owns a 36% equity stake in Barstool Sports.

My terms were let me record interview so you can’t cut and edit. Same thing I offered to let Business Insider do. Weird how nobody but me will accept these terms

My Response To The Business Insider Hit Piece That Has Been 8 Months In The Making (Part 2/2) pic.twitter.com/lkKJi9i4sb

Portnoy is going to win this one. It may take a bit, but no one really seems to care. The only people who seem amped about this are people who already hate Barstool Sports and Portnoy. It’ll blow over. You can’t beat Portnoy, guys. Deal with it.

People I love have been smeared by a false @thisisinsider article before. I made this video at that time so I’d remember what it felt like.

Not commenting on @stoolpresidente. But while there is attention on this issue i want to say: Insider is a tabloid. They lie.