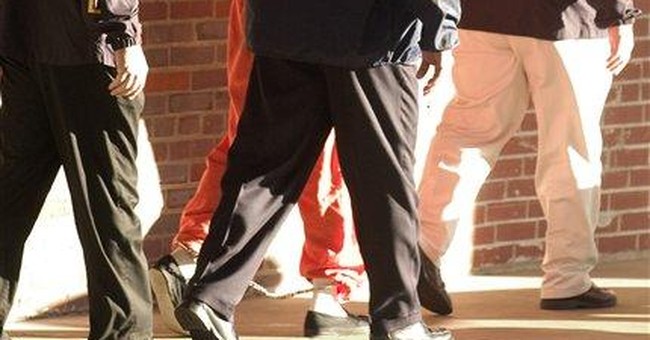 Some of these folks have been overcharged. For some, yes—some jail time might be warranted. For everyone else, it’s looking like political persecution. Even judges have noted that some of the charges filed against some of the January 6 defendants might not be constitutional. On top of that, there are reports that these defendants are being held in deplorable conditions. We had a DC jail slow-walking treatment for a defendant with a broken wrist. A judge said this looked like deliberate mistreatment and called for an investigation. The US Marshals said they would look into it. They were turned away at the jail (via WaPo):

Authorities at the D.C. jail ordered members of the U.S. Marshals Service to leave the facility after a team of deputy marshals spent several days last month conducting a surprise inspection of the jail and cataloguing “egregious” conditions, including the mistreatment of prisoners, a federal judge said Wednesday.

Speaking from the bench in U.S. District Court in Washington, Judge Royce C. Lamberth said he and other judges were briefed about the jail this week by the court’s acting U.S. marshal, Lamont J. Ruffin, who ordered the inspection. Ruffin’s findings led the Justice Department to announce that about 400 inmates, being held at the jail in federal criminal cases, will be transferred to a penitentiary in Pennsylvania.

After the surprise inspection, from Oct. 18 to Oct. 23, uncovered what Ruffin termed “systemic failures,” such as grotesquely poor sanitation and the punitive withholding of food and water from detainees, deputy marshals showed up at the jail on Sunday, Oct. 24, but were ordered to leave, Lamberth said.

He said Ruffin, in a meeting with federal judges this Tuesday, told them about the deputies being directed to exit the facility, which Ruffin described as unprecedented in his long experience with the Marshals Service.

What happened that day was a riot, sure. It was not an armed insurrection. It wasn’t a coup. It wasn’t worse than the 9/11 attacks. Liberal America is still frothing at the mouth about this event, bordering on paranoia. Normal Americans have moved on—we have much more important things to worry about that a melee that made the political class uncomfortable. CNN and MSNBC will keep harping about it in their incessant need to embarrass themselves on the national stage. Meanwhile, working families are wondering if they can pay the grocery bill, thanks to Biden-flation. Oh, and heating one’s home will be another battle this winter as Biden’s war on natural gas is set to freeze whole families and fixed-income seniors this winter, who will not be able to afford the 30-50 percent spike in prices.

We have other things to worry about concerning what was January 6. Let it go, liberal America and for God’s sake—keep the sentencing guidelines within the realm of reality. Even judges are ripping the government’s ‘trust us this guy or gal is a bad, bad person’ schtick.