Why Portland Is About to Become Heaven...If You're Homeless 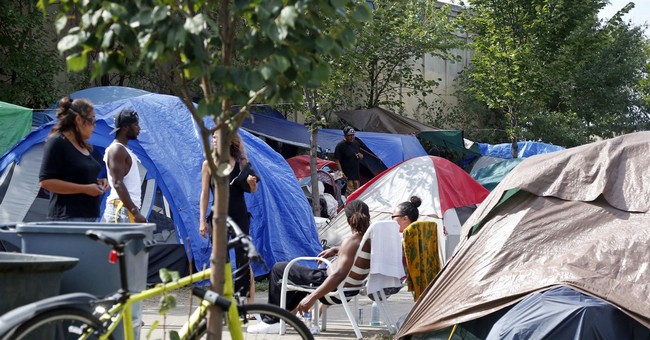 Portland is the place to be…if you're homeless. Seriously, the city is spending some serious money making sure these vagabonds have electricity in the sprawling hobo cities they've established throughout the area. Liberals on the Left Coast have made it quite difficult to remove these people because it's inhumane or something. That's not the point. These people are doing drugs, committing assaults, harassing bystanders, and it's overall a health issue. Bulldoze the tent cities, but not here, not in Portland. These new encampment areas are set to go live next year (via NY Post):

The first three government-sanctioned homeless camps, which have been dubbed “Safe Rest Village” sites by the liberal city, will be up and running at the start of 2022, officials announced Thursday.

The camps will have individual sleeping pods outfitted with electricity, heating and locking doors. Shared bathrooms, kitchens and Laundromats will also be set up in the villages.

The homeless will be granted access to the camp if they’re given referrals from first responders, social or homeless services and park rangers.

Massive homeless encampments have plagued Portland in recent years, with the city vowing back in May to start start cleaning up or removing the ever-increasing influx of tent cities.

Wait a minute — it's not just electricity. They'll have a laundromat, sleeping pods, and a kitchen. As I said, it must be nice to be homeless in Portland. It's platinum-level treatment for sure.

How about spending that money to help these folks get jobs and deal with their mental health issues, the latter of which is often underreported? The NY Post added that one of these camps is also next to an elementary school. Is that safe? The West Coast has become known for its hobo problem, along with drugs, shoplifting, and public defecation. In Nancy Pelosi's district, one man defecated inside of a local Safeway. San Francisco especially has become so bad with the pooping that there's a city crap squad dedicated to cleaning up the city. It's a mess.

As for Portland, well, the camps are coming no matter what. It's a city run by communists, but I hope parents raise these safety concerns.