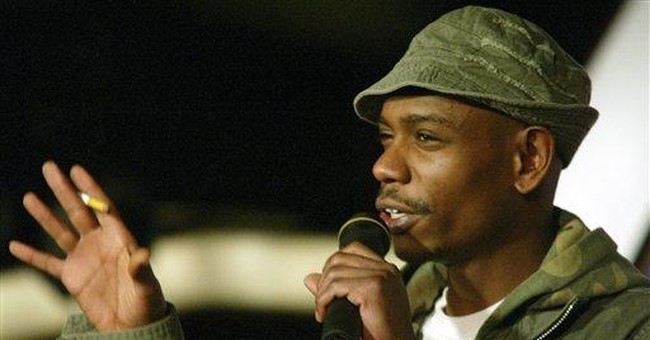 Dave Chappelle's latest comedy special, "The Closer," is un-cancellable. The "woke" mob wanted it gone. The progressives were seething with rage. The Left roared, but no one cared. We heard, sure—but nothing came of it. It's comedy. Get over it, kids. And Dave Chappelle is the gold standard for stand-up. For years, his act was labeled transphobic because he would declare things like, "gender is a fact." It is—to deny that is a weirdo alternate reality. And now, even Netflix is standing by the comic, saying that not only is his act artistic expression—it's just simply too popular (via WaPo):

In response to criticism that Dave Chappelle’s new special is transphobic, Netflix’s co-chief executive in an internal memo defended the comedian and said the streaming platform will not remove “The Closer.”

The executive, Ted Sarandos, cited “creative freedom” as one reason the company intends to keep the show online. Pressure to remove the special from Netflix has mounted both from inside and outside of the company over Chappelle’s jokes about the transgender community.

Sarandos wrote that, although some people may find stand-up comedy to be “mean-spirited,” “our members enjoy it, and it’s an important part of our content offering.”

“Chappelle is one of the most popular stand-up comedians today, and we have a long standing deal with him,” Sarandos added in the memo obtained by news outlets. “His last special ‘Sticks & Stones,’ also controversial, is our most watched, stickiest and most award winning stand-up special to date.”

As of Tuesday morning, about a week after its release, “The Closer” was the third most-watched show on Netflix. Although it received a low Rotten Tomatoes score from critics, audiences gave the special a score of 97 out of 100.

There are no sacred cows in comedy. When some decide that there are "no-no" subjects, then the profession takes a hit. Chappelle goes after everyone. If you watch his specials, everyone is a target, which makes me suspect that the woke crowd simply doesn't watch his material. In which case, they should shut the hell up. Jay Leno said that comedians should self-censor to accommodate their fragile feelings. Screw that. Keep going, Dave. You're bulletproof against the woke crybabies.