The One Jon Gruden Email We Can All Agree On...And One the Media Doesn't Want to Talk About 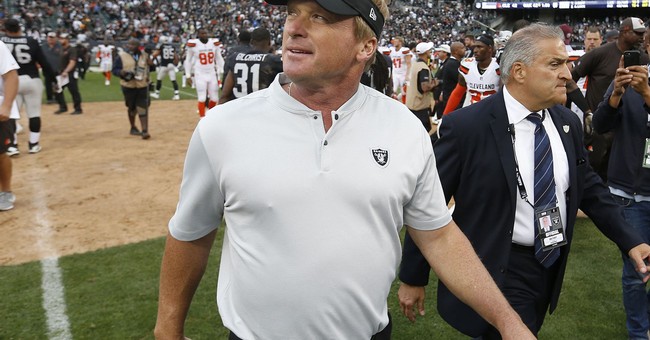 Jon Gruden is no longer the coach of the Las Vegas Raiders. This comes after a trove of emails from a decade ago showed the Super Bowl-winning coach using coarse language. Anti-gay, misogynistic, and racially charged rhetoric was used in the emails. So, it was a classic problematic word salad that the media feasts upon. It gave a chance for the ‘woke’ to rail against the NFL, sports, and white people again. Yet, let’s be clear—the emails are bad but it’s minor league compared to other scandals and shenanigans that have hit the league. Gruden resigned last night. Move on—it’s over. This isn’t Watergate (via NYT):

Mark Davis, the owner of the Raiders, said in a statement that he had accepted the resignation. Rich Bisaccia, the Raiders’ special teams coordinator, was elevated to interim head coach, the team said.

Gruden’s departure came after a New York Times report that N.F.L. officials, as part of a separate workplace misconduct investigation that did not directly involve him, found that Gruden had casually and frequently unleashed misogynistic and homophobic language over several years to denigrate people around the game and to mock some of the league’s momentous changes.

He denounced the emergence of women as referees, the drafting of a gay player and the tolerance of players protesting during the playing of the national anthem, according to emails reviewed by The Times.

Gruden’s messages were sent to Bruce Allen, the former president of the Washington Football Team, and others, while he was working for ESPN as a color analyst during “Monday Night Football.” In the emails, Gruden called the league’s commissioner, Roger Goodell, a “faggot” and a “clueless anti football pussy” and said that Goodell should not have pressured Jeff Fisher, then the coach of the Rams, to draft “queers,” a reference to Michael Sam, a gay player chosen by the team in 2014.

So, right there is the reason why Gruden was forced to leave. You can’t call the NFL commissioner that and keep your job. That was the real reason. Yet, while the media focuses on these emails, they’re not really highlighting one he wrote about Biden, which is true (via The Hill):

The report reveals a litany of racist, homophobic and other vulgar language used by the former Super Bowl-winning coach and prime-time broadcaster dating back to 2011, when then-President Obama was gearing up to run for a second term and Biden was vice president.

I mean, Gruden is right about Biden. I will say that. I think you all agree. But let’s not act like this is some huge story. It was collateral damage. These emails were revealed after the league investigated the Washington Redskins (they will always be the Redskins to me) over sexual harassment concerns. That report on the Redskins has yet to be released. Texans’ quarterback Deshaun Watson has been accused of sexually harassing over 20 women and he’s still eligible to play. Jacksonville Jaguars head coach Urban Meyer is probably breathing a sigh of relief right now since he was the flavor of the week for his outing to a Columbus-area bar where he was seen allegedly touching a young woman who was not his wife. It’s created all sorts of locker room issues—with many noting that he might not survive the season. Well, it looks like he came out on top regarding NFL controversies…for now.

At any rate, Gruden’s email about Biden was right. Just like how Lt. Col. Ralph Peters was correct in calling Obama a ‘p**sy.’ Kernels of truth everywhere here.