Did Fauci Really Say More Kids Have Died of COVID Than the Flu? 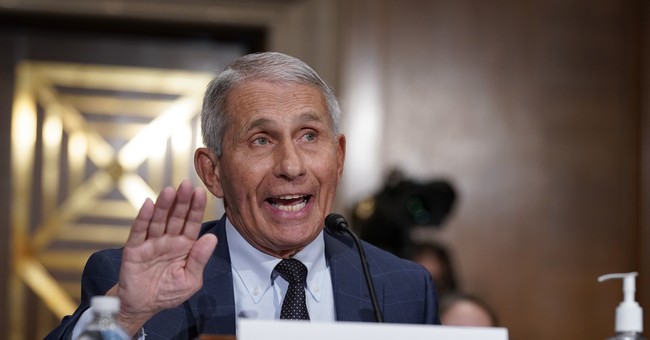 Anthony Fauci has the most punchable face right now. The man goes back and forth on everything. He admits that store-bought masks don’t work to curb the spread of COVID. The NIH looks like they were serious players in the research that created the virus that most likely escaped from a lab in Wuhan. He was against a study that did not recommend COVID vaccine boosters, now he’s changing his tune. He’s the QB1 concerning the 'get vaccinated but also stay inside' narrative that undercut the whole vaccine push. It rightfully generated skepticism about whether the vaccine even worked. Now, he’s dropped Nagasaki-sized bombs of misinformation about COVID, kids, and the flu. He said that we’ve lost more kids to COVID than the flu. That’s simply a lie. And the CDC’s own data proves that:

Did Anthony Fauci lie when he said more children have died from the virus than ever have died from the flu? Unless you think he's an incompetent boob that didn't learn a thing in 50 years in public health (hold the jokes please), then yes. And I will demonstrate that here.

So far, there have been 439 deaths of children ages 0-17 *with* COVID-19 since the start of the pandemic. Remember, this is over 20 months -- the first of many important qualifiers.

So Fauci was telling the truth, right? Hold up. No, not even close.

COVID-19 deaths are capturing almost every COVID-induced illness in the past year because every kid is being tested that goes into a hospital, and it's overcounting because any kid that dies with a positive test is a multiple cause COVID death.

Flu, on the other hand, isn't counted that way. If we tested every kid in the hospital during flu season and counted every kid dying with the flu as dying from the flu, numbers would be insane.

CDC knows this. They know the real count is much higher.

We see this in hospitalizations. The EIP surveillance network, which covers about 14 states and roughly 10% of the U.S. population designed to match demographics, estimates 33.5 cumulative hospitalizations for the flu in 2017-18 for ages 0-17.

But the same surveillance network shows 55.5 hospitalizations 0-17 per 100,000. Remember, this is in ~20 months. This is also "COVID-associated hospitalizations" because the CDC acknowledges it includes all confirmed positive tests...

This is backed up by a larger, more comprehensive study that just came out reported by The Atlantic that found in 50,000 hospitalized patients in VA hospitals, almost 48 percent have been asymptomatic or mild/moderate symptoms in 2021.

Bottom line: there is no evidence that COVID-19 is more dangerous to children than the flu. The data shows the opposite. Fauci did indeed tell a big fib.

Despite counting every pediatric death as one *with* COVID-19, not necessarily *from*, the weekly mortality rate for COVID per million for ages 0-17 is 46% lower than the average 10 previous estimated flu season disease burdens *from* flu and 79% lower than H1N1. pic.twitter.com/nZonTyo6qJ

I know you have done this already but mute this guy when he’s on television. What he says is a lie. It’s not true. He’s been a science fiction peddler for months and he really has no authority to issue any edicts whatsoever. He has become the most insufferable man on the planet who at this point—should probably be launched into the sun.

Shut up, Tony. You’re a lying sack—and always will be. Also, it’s you people who have derailed your goals on vaccination by acting as if they don’t work so a big round of applause for all you idiots.