Why Are Empty Planes Leaving Kabul As Americans Remain Stranded Behind Enemy Lines? 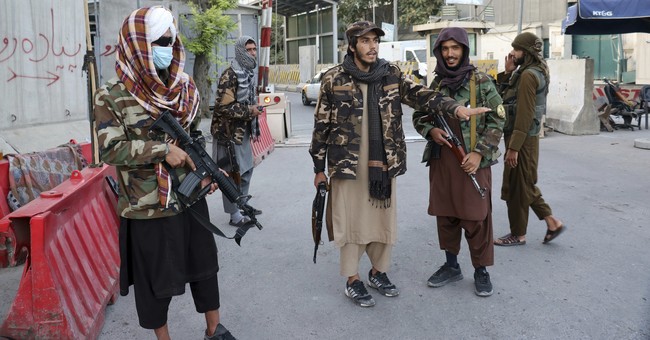 As Spencer wrote earlier this morning, there have been two bombings near the airport in Kabul three US Marines have been injured in the attacks.

Biden now has another choice to make. He said there would be severe consequences for attacks on U.S. troops. What will he do about it?

We all know we're leaving Americans behind after August 31. We're going to trust the Taliban that they won't hurt them once we pull our troops out. Don't worry guys, Secretary of State Antony Blinken says all diplomatic tools will be utilized to get you out. If you were able to watch his presser yesterday, the man is a deer in the headlights. If I were trapped in Afghanistan, I'd say I'm screwed if that's the guy at the State Department quarterbacking. He just reeks of weakness. No one in the Biden administration can do their jobs. We're trusting the Taliban, and we've told them sternly to behave and respect women's rights when we leave. Why are Democrats so bad at this?

Biden said the airport at Kabul was easily accessible. That's false. The Taliban are beating Americans as they try to make it there; passports are being seized. Checkpoints are set up all over, and now we're telling our stranded Americans to avoid the airport over security threats as there are now suicide bombings outside the airport. ISIS and al-Qaeda are on the prowl. Given how disastrous our exit has been from the country and that this is a government operation, are we shocked that US planes are leaving Kabul empty? (via NY Post) [emphasis mine]:

With days to go before the US is slated to fly aircraft out of the Hamid Karzai International Airport for the last time — effectively bringing the two-decade war to a dismal close — desperate and fearful Afghans and American citizens face an anguished final fight for freedom.

The mayhem has prompted a slew of private companies to set up their own operations — although many have bemoaned the fact that despite having the aircraft and funds to evacuate thousands, obtaining landing permits for the US-controlled airport has been exceedingly difficult, if not impossible.

“Disneyland and Mickey Mouse are better at queueing and getting people on rides than the US government is in getting its patriots home from a war zone,” said Washington fixer Robert Stryk, who has been chartering private planes out of Kabul with the help of a former Navy SEAL, US Rep. Scott Taylor (R-Va.).

According to Stryk, they have had to rely on intel from foreign allies — in large part British M16 agents — to help facilitate people through and locate evacuees.

“The system is broken, so we have had to go around the US system by using foreign countries’ intelligence agencies to get Americans through. The issue is if the paperwork isn’t perfect — names are spelled differently with ethnic spellings or if SIV spellings don’t exactly match passports — they can’t get through,” he said. “The only guys going outside the wire have been the South Africans, Brits, French special forces and the Qataris. And they have been super helpful to us.”

Taylor and Stryk partnered with Regulus Global, a Virginia-based logistics company that specializes in humanitarian and national security missions in hotspots around the globe. As part of their initiative, they have also created a database to store visa and passport information to help expedite entry into the airport and mitigate the backlog of those wishing to flee.

Is this stranded yet, @PressSec? https://t.co/MzRpTQEkCm

Biden is going to leave an inexcusable number of Americans behind because the Taliban said we had to leave by that date. He's also been obsessed about the August 31 deadline and wanting to move on to other things. He doesn't care. His latest address was heavily centered on domestic policy. And now, the evolving White House narrative is that if you're left behind, it's your fault. It's a lashing out that's common for someone who is losing mental capacity and cannot keep up. Biden is just that; he can't do the job. He's proven with this crisis that he's too old, too stupid, and too weak to get the job done. He sent his CIA director to get b**** slapped by the Taliban. That's why we must leave by August 31. They wanted an extension. The terrorists refused, so Biden caved to the terrorists.

"The adults are back" was a 2020 campaign pitch. A return to norms was a selling line. It was a snake-oil pitch. Tens of millions of us knew that. For others, well, only someone who is more of an idiot than Biden can say this is going well. Liberal America, your president is lost in space.