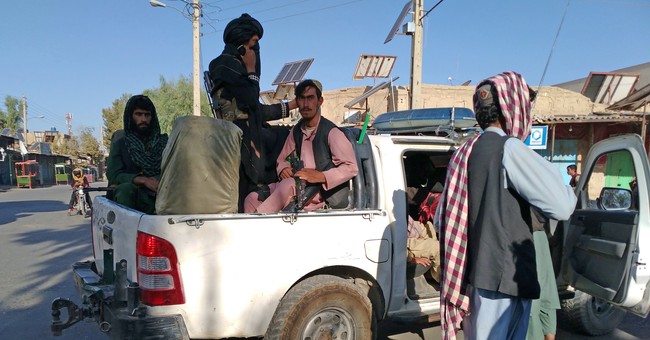 Biden’s national security adviser addressed the press today. Jake Sullivan was joined by White House Press Secretary Jen Psaki who had originally planned to be off this week. Well, the mayhem engulfing Afghanistan cut that short. We have civilians who are desperate to flee the Taliban, who rolled into Kabul last weekend. They’re falling from US Air Force planes that are taking off from Hamid Karzai Airport. There are reports of beatings, executions, and other atrocities committed by the Taliban. They’re collecting weapons from civilians. They’re searching for those who aided the West in the war effort. They’re taking their time. The real slaughter will commence once we’re all gone.

Sullivan took many questions, noting that to ensure a safe exit like the one most expected, it would have taken more troops since the Taliban began their offensive in May. Well, then that’s what you do, chief. An orderly withdrawal should have included finding all Americans and key Afghan allies and their families and prepping them to leave. Destroying weapons caches and other technology. This could have been done if Joe Biden had read the intelligence reports which he ignored. Spencer wrote about that today, and he lied about it. Joe was his own ‘Baghdad Bob’ on Afghanistan. He wanted out—and now we’re in this fiasco.

Biden National Security Advisor: “Certainly a fair amount” of U.S. weapons “has fallen into the hands of the Taliban”pic.twitter.com/voITsgQHZl

We abandoned Bagram Air Force Base which had 5,000 terrorists detained there. The Taliban released all of them. Weapons were left everywhere. And now we have 5-10,000 Americans who are trapped in the country. Will they be safely evacuated? We don’t know. I’m serious. Sullivan and Psaki could not guarantee that Americans in Afghanistan could be delivered safely out of the control by August 31. That’s frankly disturbing. What is going on here? It’s clown town.

SULLIVAN: "What I'm going to do is stay focused on the task at hand which is getting as many people out as rapidly as possible."

REPORTER: "So you can't commit to bringing back every American?" pic.twitter.com/mS6LbIgi4p

Q: "Can you offer any guarantee to the Americans and Afghan allies that, if they remain there past the end of the month, US troops will help them evacuate?"

PSAKI: "Our focus right now is on doing the work at hand." pic.twitter.com/kBAW8UM3Vd

This morning, Pentagon Spokesman John Kirby said on CNN that the military is not "equipped and able" to help Americans trapped inside their homes in Kabul. pic.twitter.com/km02CVNeha

On top of that, Sullivan gave a weak sauce threat to the Taliban saying that the international community will condemn and isolate them when they torch women’s rights in the country. The Taliban was isolated prior to the 2001 invasion. They didn’t care. They’ve seen what the international community does in these cases. Nothing. And even when there is armed conflict, they’ve driven them out.

Also, this notion that Americans trapped in the country can just get to the airport is absurd. First, they’re being told the US government cannot guarantee their safety. It’s not like they can hop on an Uber.

National Security Adviser Jake Sullivan says the Taliban have guaranteed safe passage for Americans in Afghanistan to the Kabul airport. So Americans are meant to trust their lives to the good graces of the Taliban? Is that really the plan?

So, you're blaming the intel community now? https://t.co/evorX7E9Fh

"We planned for all contingencies." https://t.co/nUI51bEKKm

I’ll circle back to the second worst talking point today which is the one about troop deployments. The orderly withdrawal and keeping the Taliban at bay would have resulted in more troops and more casualties. Biden didn’t want that. Well, didn’t we just redeploy thousands of troops to secure some resemblance of a safe zone in Kabul to start these evacuations? It could have happened. Biden appears as if he just didn’t want to do it. It was too hard. This was a long war. Should we be shocked that the time needed for an orderly withdrawal could also be an extended period? It’s a debate for sure regarding a temporary surge to ensure an orderly exit, but what is not up for dispute is Biden’s inability to the job.

This chaotic departure was botched. It was brain dead just like the president. And amid this chaos, Biden has not spoken to ANY world leaders. America is back—that’s what I was told with Biden. It’s not. America is lost. America is losing. America has no leader. He’d rather be on vacation. The adults were said to be in the White House. All I see are the idiotic and mentally challenged.