Shots Fired? New York City's Next Mayor Sent a Message to Ocasio-Cortez and Her 'Defund the Police' Antics 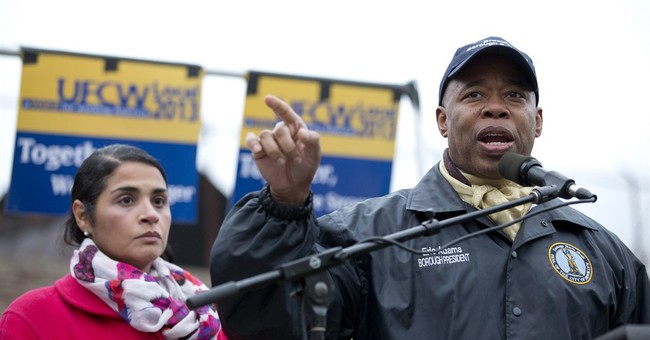 Do I wish a Republican would win New York City’s mayoral race this year? Sure. But that’s not going to happen. In these deep-blue bastions, all you can hope for is a Democrat who is pro-public safety, pro-business, and pro-school choice. New York has a few of them. One is about to succeed anti-cop Mayor Bill de Blasio. His name is Eric Adams, a former police officer with the NYPD.

A mayor who bashed the police being replaced by a former cop—it’s all you need to know about this race. Despite the stories of police brutality, some real, some fake, everyone wants more police on the streets. Everyone wants law and order. Everyone wants to feel safe, and the 'defund the police' experiment that was peddled by white liberals is over. Almost every city that’s peddled this nonsense has been engulfed with crime. Oh, and they’re being forced to fund the police. Seattle, which now is seeing everyone getting shot all over the place, is making a call for more police after over 200 officers left the force in protest of the city council passing ordinances that pretty much prevented them from doing their jobs. In the Big Apple, Adams who is pretty much assured victory in November doesn’t seem hesitant about declaring war on the radical wing of the Democratic Party regarding law and order, which is why a lot of progressives in the city are probably not happy about the results of the Democratic primary. Adams fired his warning shot last week (via NY Post):

A video recording of Adams’ speech shows him telling supporters that the battle he faced wasn’t with his political rivals in the Nov. 2 election, but with the Democratic Socialists of America.

“They realize that if I’m successful, we’re going to start the process of regaining control of our cities.”

The remarks sparked cheers and applause from attendees at the Monday night event in Douglaston, Queens.

Efforts to defund the police — including last year’s $1 billion cut to the NYPD’s budget — have prompted fierce pushback amid surging crime in cities across the country, with former NYPD Commissioner Bill Bratton and co-author Peter Knobler calling it “a hashtag, not a sophisticated policy calculated to boost public safety” in a Post op-ed last month.

“Fewer cops, more criminals? That’s no platform to run on. That’s no city to live in. Defund the police? No, re-fund!” they added.

The reality is that Adams is likely to be the next mayor. The progressive reaction to his primary win is encouraging; it means they don’t like him. Whatever progressives loathe is a good sign and if Adams can turn the city around—I say God bless. Mayor Bloomberg was abysmal on gun control, but he was pro-school choice, backed the NYPD, and brought billions of dollars in economic development into the city. Was he a Republican? On paper—he’s really a Democrat, we all know that. But I’d happily back anyone like that as mayor for life, but never for president. I’m hoping Adams backs the blue and gets some life into the city after having a communist leech on it for the past eight years. He's declared war on Alexandria Ocasio-Cortez's brand of Democratic politics. If he turns out to be serious in that effort, we should all wish him the best.