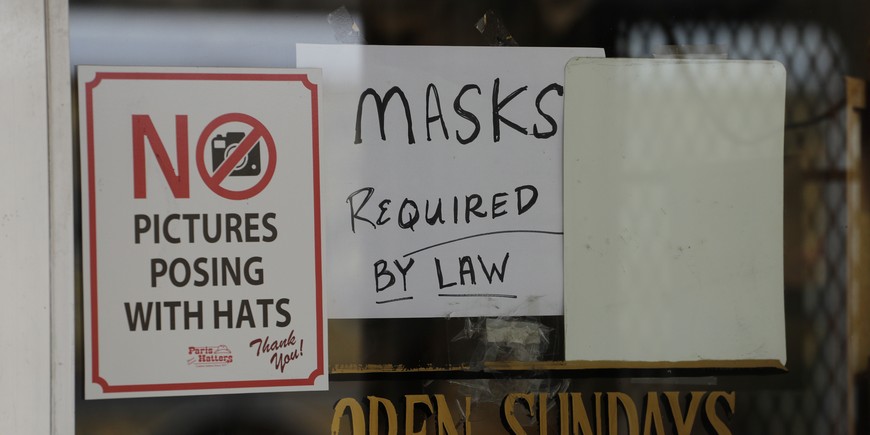 Fear is contagious. It’s almost as bad as the Delta variant. Again, is the new variant more transmissible? Yes. Is it deadlier? No. Does it make you sicker? No. Are those being impacted primarily the unvaccinated? Most definitely. So, when you want to increase vaccination rates, the government did what it did best: screw things up. Fully vaccinated people now must wear masks again in high-case areas. What constitutes a highly infectious area? Well, that’s not clear yet, but I’m sure the CDC and Dr. Anthony Fauci will make up some science fiction to justify this new mask mandate. The mandates are coming too. Not nationwide, Biden can’t do that yet due to the midterms, but federal agencies are one-by-one mandating it for workers who risk the loss of pay or their jobs if they refuse.

Get vaccinated but also continue to live in fear. Yeah, no wonder why hesitancy is through the roof. All this move does is make the vaccine-hesitant dig in further and give anti-vaxxers all the ammunition they need to chip away at the credibility of the vaccines. You can’t be mad at the latter group when those who want us to get vaccinated offer all the ammunition to shoot that narrative down or at the very least question it—heavily.

Well, take a break from being mad and read what Johns Hopkins doctor Dr. Marty Makary wrote about new studies about natural immunity which is ignored by Fauci and company. He also rehashed an old Fauci statistic that shreds the current push for new mask protocols and possible lockdowns (via WSJ) [emphasis mine]:

The news about the U.S. Covid pandemic is even better than you’ve heard. Some 80% to 85% of American adults are immune to the virus: More than 64% have received at least one vaccine dose and, of those who haven’t, roughly half have natural immunity from prior infection. There’s ample scientific evidence that natural immunity is effective and durable, and public-health leaders should pay it heed.

Only around 10% of Americans have had confirmed positive Covid tests, but four to six times as many have likely had the infection. A February study in Nature used antibody screenings in late summer 2020 to estimate there had been seven times as many actual cases as confirmed cases. A similar study, by the University of Albany and New York State Department of Health, revealed that by the end of March 2020—the first month of New York’s pandemic—23% of the city’s population had antibodies. That share necessarily increased as the pandemic spread.

Natural immunity is durable. Researchers from Washington University in St. Louis reported last month that 11 months after a mild infection immune cells were still capable of producing protective antibodies. The authors concluded that prior Covid infection induces a “robust” and “long-lived humoral immune response,” leading some scientists to suggest that natural immunity is probably lifelong. Because infection began months earlier than vaccination, we have more follow-up data on the duration of natural immunity than on vaccinated immunity.

Skeptics of natural immunity point to Manaus, capital of the Brazilian state of Amazonas, where reports in January suggested a wave of re-infections despite herd immunity. But the initial estimate of those infected was incorrect because it was based on antibody testing among those who donated convalescent plasma—an unrepresentative subgroup of the population. A follow-up study debunked the re-infection hypothesis and found only three confirmed re-infections in the entire state, whose population exceeds four million. Other studies have confirmed that re-infections are rare and usually asymptomatic or mild.

Some health officials warn of possible variants resistant to natural immunity. But none of the hundreds of variants observed so far have evaded either natural or vaccinated immunity with the three vaccines authorized in the U.S.

Should the previously infected be vaccinated? My clinical advice to healthy patients with natural immunity is that one shot is sufficient, and maybe not even necessary, although it could increase the long-term durability of immunity. A University of Pennsylvania study of people previously infected with Covid found that a single vaccine dose triggered a strong immune response, with no increase in that response after a second dose. A separate study from New York’s Mount Sinai School of Medicine concluded that “the antibody response to the first vaccine dose in individuals with pre-existing immunity is equal to or even exceeds the titers found in naïve”—never-infected—“individuals after the second dose.”

Dr. Fauci said last Aug. 13 that when you have fewer than 10 cases per 100,000, “you should be able to open up safely and clearly.” The U.S. reached that point in mid-May. It’s time to stop the fear mongering and level with the public about the incredible capabilities of both modern medical research and the human body’s immune system.

Now, that is a breath of fresh air, right? Sadly, Dr. Makary is sidelined on most networks in favor of pro-lockdown and pandemonium ‘experts’ who are peddling an agenda where we may never be allowed to go outside again. This is the cost of the ‘COVID ZERO’ approach. Everything can get you so…just live inside, which ironically is where this virus thrives. Most cases are from household spread, not gyms, restaurants, bars, hair salons, or barbershops. For those who have recovered from COVID, Makary said his “clinical advice to healthy patients with natural immunity is that one shot is sufficient, and maybe not even necessary, although it could increase the long-term durability of immunity.”

I got vaccinated post-recovery. It was my choice, but the vaccinated coupled with those who have recovered from the virus, which is in the tens of millions, should be considered. It isn’t. The vaccines work against the variants, as do people who have acquired natural immunity from it. Both are effective.

If the government wants to boost vaccine rates, then all attention should be focused on proper science-based messaging to convince the unvaccinated. You cannot do that when you a) fearmonger, b) shame, and c) offer contradictory advice. The vaccinated should be viewed as an example of what awaits, which is a return to normalcy. "Get the shot, but still mask up and remain in the bunker" give no incentive whatsoever to those on the fence. It doesn’t take a scientist to know why vaccination rates have stalled. It’s the experts’ continued failure to message about the vaccine properly since they decided to get political. The jobs reports are bad. Inflation is rising. No major bills seem poised for passage from the Biden administration, so rehash the panic over Delta to keep the nation’s attention away from a presidency that is rather braindead.