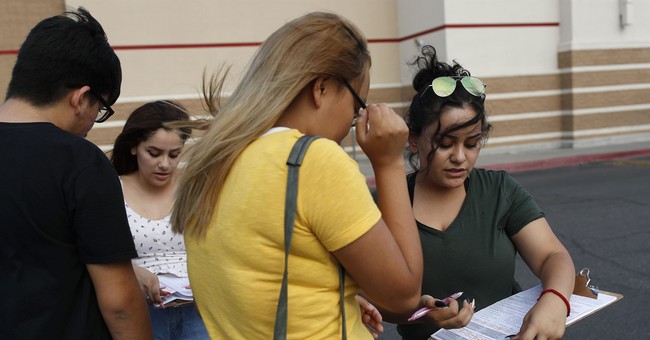 It has gone beyond exit polling data. Across the country, 2020 was a killing field for Democrats when it came to Hispanic voter support. This bloc of voters that Democrats covet fled the party. It wasn’t marginal shifts either. We’re talking six-to-nine percentage points here in areas where Hispanic voters are heavily concentrated. What happened? Again, David Shor shed some more light on this topic. Shor is a liberal Democrat but he’s very aware of how ‘wokeness’ and the influx of college-educated white liberals has transformed the Democratic Party, in some ways for the worst. During a hit for National Public Radio, Shor not only went into the Latino exodus but also the Democratic Party’s shifts when it comes to messaging. They’re not reaching out as they should, focusing on issues that are intensely ideological to the point where even traditional Democratic-supporting voter blocs, like blacks and Latinos, are fleeing the party. He zeroes in on what he pointed out post-2020: defund the police. This war cry cost Democrats a ton of votes with nonwhite voters. He also rehashed how white liberals’ push to make all issues ideological is a losing strategy. If you focus on health care, you’d be surprised who will pull up a chair and listen, especially since a good chunk of the Trump coalition describes themselves as economically progressive (via NPR):

Precinct by precinct, you know, what we really found was that even though there were particularly market shifts, you know - in South Texas, there were 30-point swings in many counties. You know, there were counties that had voted for Democrats solidly in the 70 to 80% percent range since the 1890s that Trump either won or came very close to winning. And in South Florida generally and Florida in general, there was something like a 13 or 14% swing. That said, basically everywhere where there were large concentrations of Hispanic voters, there were large swings in the 6 to 9% range. And, you know, that ranges from, you know, the Bronx in New York to Arizona to Massachusetts to California. This was a national trend that happened basically everywhere. And, you know, one of the biggest predictors of switching from voting for Clinton in 2016 to voting in Trump were attitudes toward crime, attitudes toward policing. You know, I think that that's a microcosm for, like, a larger story.

I think that in the last four years, as the clout of college-educated white people in the Democratic Party has increased, you know, the Democratic Party brand has increasingly been associated, you know, with liberalism in a way that it might not have been before. And I think that there's a lot of micro stories. I think that, you know, if you look at defund the police, that's a highly ideological issue where liberals are on one end, and conservatives are on the other. And that really contrasts to other issues, you know, like increasing the minimum wage or getting people health care, where there really are a lot of conservatives who defect and have liberal positions on these issues.

Host Lulu Garcia-Navarro also noted that immigration is not a hot topic issue with Hispanic voters. It is with white liberals, which explains the messaging miscommunication. Shor added that the rise of social media and online donations has altered the incentive culture for the Democratic Party and that led to the structure shying away from finding messages and policies that appeal to a broad group of people. That is the iceberg that Democrats will hit soon. White liberals framing a strategy for which the data does not exist. No one speaks ‘woke.’ No one cares about proper pronouns. No one cares about this stuff. It doesn’t help you get jobs or pay the rent. It doesn’t help with the grocery bill. It’s an academic exercise that rich white liberals are privileged to dabble in while everyone else needs to work. And yet, because they give disproportionate amounts of money to Democrats, white liberals will continue to dominate the agenda-setting. Also, being pro-crime, which has become a trend in Democrat-run cities, is another guaranteed way for Democrats to lose more votes with their traditional allies.