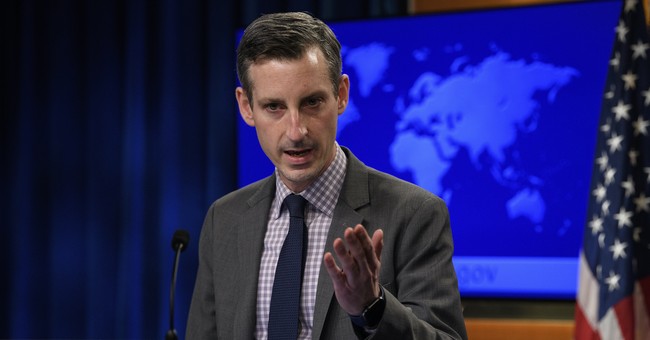 State Department spokesperson Ned Price took it in the teeth again by the Associated Press when he tried to spin some aspects about our withdrawal from Afghanistan namely that this was something they inherited from the Trump administration and that it could not be reversed. Price then put all the chips in the table by saying that you would be hard-pressed to find any international agreement that the previous administration signed onto that this administration walked away from since Biden took office. And that’s when AP Reporter Matt Lee went to work—brutally. This exchange occurred on July 6. Lee also wondered if the Biden foreign policy team doesn’t have the talent to renegotiate existing agreements. While we are leaving Afghanistan which I’m sure isn’t viewed as an unpopular move by most, this notion that the Taliban will be any different is absurd, as Lee pointed out during this Q&A session (via State Department):

Ned Price is confronted for denying facts from the podium.

VIDEO: AP reporter calls out Biden State Dept spox Ned Price's bogus spin: "You just challenged me to come up with an international agreement that the [Trump administration] signed that you guys have walked away from, and I just gave you, I think, 3." https://t.co/JQAUmiDyuR pic.twitter.com/w3fywsTXD4

MATT LEE, AP: Ned, I don’t understand three things. One, I don’t understand how you’re able to make this claim that the Taliban actually want international acceptance and aid when there is nothing in their history that suggests that they do. I’ve asked you about this before, and I – there is no good answer other than, well, a bunch of them are in Doha talking. But that doesn’t mean anything. They never wanted or cared about – they were perfectly happy when Pakistan was the only country on the planet that recognized them. That’s number one.

Number two, the argument that you guys inherited an agreement with the Taliban that the previous administration concluded and that you had no choice, I don’t understand that either. This administration inherited plenty from the previous administration that it absolutely reversed. Are you saying that you’re not – you have a – you’re not confident in your negotiating skills that you could have renegotiated with – that you couldn’t have renegotiated a deal with the Taliban and that the – and are you saying that the President, in fact, didn’t want to take troops out, didn’t want to withdraw?

And then lastly, the thing I don’t understand – well, maybe not understand, but you don’t want to talk about the historic analogy that Said made to Vietnam. Let’s go next door to Cambodia. Are you familiar at all with the letter that Sirik Matak wrote to John Gunther Dean, who was the U.S. ambassador to Cambodia in April of 1975?

LEE: If you’re not familiar with it —

MR PRICE: It’s been a while.

LEE: — I suggest you familiarize yourself with it because it may end up being sadly prescient. But if you could answer the first two, that would be great. Thanks.

MR PRICE: Sure. Well, on your second question, Matt, I think you’re actually confusing different things here. These are apples and oranges. Yes, we changed quite a few U.S. policies across a number of fronts, but I think you would be hard-pressed to find an international agreement that the United States signed on to during the last administration that this administration has jettisoned, done away with. This is the point that we have made in any number of different —

LEE: How about the Geneva protocol on the anti-abortion stuff?

LEE: I mean, you just challenged me to come up with an international agreement that the previous administration signed that you guys have walked away from, and I just gave you, I think, three.

Lee’s shredding of the spin is almost as entertaining as when Price tried to take credit for a Trump-era policy over the Nord Stream pipeline back in February:

For reference, here’s the letter Sirik Matak sent to the late US Ambassador to Cambodia John Gunther Dean when the capital Phnom Penh was surrounded by the Khmer Rogue. Matak, a member of the Cambodian Royal Family, had his name on a hit list and was offered asylum by the US:

I thank you very sincerely for your letter and for your offer to transport me towards freedom. I cannot, alas, leave in such a cowardly fashion.

As for you and in particular for your great country, I never believed for a moment that you would have this sentiment of abandoning a people which has chosen liberty. You have refused us your protection and we can do nothing about it. You leave us and it is my wish that you and your country will find happiness under the sky.

But mark it well that, if I shall die here on the spot and in my country that I love, it is too bad because we are all born and must die one day. I have only committed the mistake of believing in you, the Americans.

Dean passed away in 2019 and named our abandonment of Cambodia as one of the most tragic days of his life (via NYT):

It was one of the most memorable images of American defeat in Southeast Asia — John Gunther Dean, ambassador to Cambodia, clutching an American flag under his arm while being evacuated from Phnom Penh.

Mr. Dean would later call that day, April 12, 1975, one of the most tragic of his life, the day the United States “abandoned Cambodia,” he said, “and handed it over to the butcher.”

The butcher was the Khmer Rouge regime, led by the Marxist dictator Pol Pot, which ousted the pro-American government and would in the end be responsible for the genocide of two million people, one quarter of the Cambodian population.

“We’d accepted responsibility for Cambodia and then walked out without fulfilling our promise,” Mr. Dean told The Associated Press in 2015, 40 years after the fall of Phnom Penh to the Khmer Rouge. “That’s the worst thing a country can do.”

We’ll see if history repeats itself. In some ways, it has as our adventure in Southeast Asia and Afghanistan has worn Americans’ patience thin concerning time, money, and men. We’re leaving again. Afghanistan maintains its reputation as a graveyard for empires. We had 20 years to do something and we’re leaving with the Taliban stronger than ever, controlling 85 percent of the country. Biden says the national government won’t collapse. It will. We all see it coming.