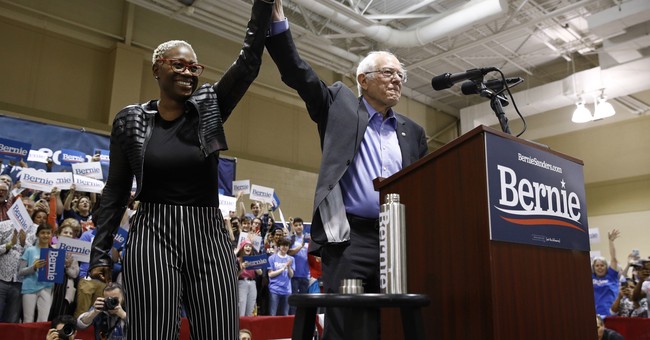 This isn’t the first time the progressive Left has gone to war with the Democratic Party establishment. These fights get nasty. The dirty laundry from the first war was aired for all to see days before the 2016 Democratic National Convention. Emails from the national committee showed staffers mulling ways to stop Sen. Bernie Sanders’ (I-VT) bid for the nomination. It was Hillary’s time, remember? Except that it wasn’t. Donald Trump would clinch one of the biggest upsets in American political history. There was another bout of conflict during the 2020 primaries. Every time, Bernie Sanders would flounder south of the Mason-Dixon line. Every time, this area would derail his White House ambitions. You need black Democrats to win—Sanders isn’t getting them. That doesn’t mean there aren’t black progressives who are left as hell and are still all about this Vermont socialist.

Nina Turner is a former Ohio state senator who is running to fill the congressional seat vacated by Democratic Rep. Marcia Fudge who is now Biden’s Secretary for Housing and Urban Development. Open warfare between the two camps of the Democratic Party could erupt as Rep. James Clyburn (D-SC), the House Majority Whip, has decided to intervene and endorse Turner’s opponent in the hopes the Sanders ally could be derailed. Clyburn launched this political missile strike last week (via NYT):

Mr. Clyburn, the No. 3 House Democrat, took aim at one of Mr. Sanders’s most outspoken acolytes, Nina Turner, a hero to the left who is surging in her campaign in Ohio to claim the Cleveland-based congressional seat vacated by the housing secretary, Marcia L. Fudge.

He said his decision to back Ms. Brown, the chairwoman of the Cuyahoga County Democratic Party, was not about Mr. Sanders, or even Ms. Turner, who remains the favorite before the contest on Aug. 3 in the heavily Democratic district. But he took a swipe at what he called the “sloganeering” of the party’s left flank, which has risen to power with calls for “Medicare for all,” and to “abolish ICE” and “defund the police.”

“What I try to do is demonstrate by precept and example how we are to proceed as a party,” Mr. Clyburn said in an interview. “When I spoke out against sloganeering, like ‘Burn, baby, burn’ in the 1960s and ‘defund the police,’ which I think is cutting the throats of the party, I know exactly where my constituents are. They are against that, and I’m against that.”

The special election in Cleveland is highlighting the vast generational divide and ideological gulf that the Democratic Party faces as the entire House leadership heads toward the sunset. Mr. Clyburn, Speaker Nancy Pelosi and the House majority leader, Representative Steny H. Hoyer, are all octogenarians, leading an increasingly youthful, diverse and restive caucus. Ms. Pelosi even agreed to vacate her position after this Congress, and the next year will be an ideological battle over who will succeed her.

Ms. Brown has the backing of the Democratic establishment, including not only Mr. Clyburn but also Hillary Clinton; Richard Cordray, a former Ohio attorney general; Representative Joyce Beatty of Ohio, the chairwoman of the Congressional Black Caucus; and moderate Democrats like Representatives Josh Gottheimer of New Jersey and David Trone of Maryland.

Ms. Turner, who has the endorsements of much of the House Progressive Caucus, including the so-called squad — Representatives Alexandria Ocasio-Cortez, Ayanna S. Pressley, Ilhan Omar and Rashida Tlaib — would be a strong new voice for the congressional left. And the left is increasingly focused on Black and Hispanic districts that they see as safe redoubts for ideological candidates.

Yeah, that’s quite a horror show backing Turner. Pro-crime, anti-police, and pro-radical Islamic terrorism—no wonder why Clyburn and others are looking to keep this lefty bunch few and far between. The problem is that while not the majority on the Hill, they do command a significant slice of the caucus and they use social media well to mobilize their followers. Bloodsports could erupt. The field for the Democratic primary in this contest is loaded. It’ll be held on August 3.

Recommended
There's Another Mass Shooting That Got Buried by the Media...And It's Not Hard To Figure Out Why
Matt Vespa
Share this on Facebook
Tweet
White House Isn't Paying Attention to Americans Getting Their Retirement Plans Wiped Out
Katie Pavlich
New Data Shows Americans Care About One Issue More than Inflation and Abortion