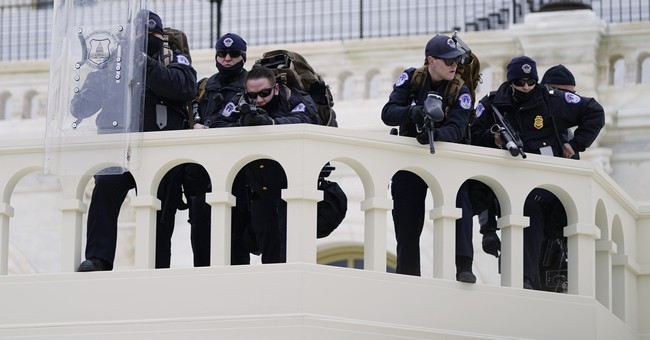 Some 500 people have been charged for their participation in the Capitol Hill riot, but one man, Christopher Kelly, will have his case dismissed. It’s simple to explain this turn of events and he’s probably not the only one. There’s no evidence. There was a significant case brought against him, but a further review found nothing. It’s another glimpse into the scary legal adventure one could be subjected to by federal authorities. Was Kelly on Capitol grounds? Yes, but that’s all we know (via NBC News):

It is the first of the nearly 500 Capitol riot cases to collapse for lack of evidence.

The man, Christopher Kelly of New York City, was arrested Jan. 20 after the FBI said a paid confidential informant told agents that Kelly was posting material on a Facebook Messenger app about the riot and his plans to be in Washington on Jan. 6. The informant said a photo taken inside the Capitol was also posted, according to the FBI.

In the charging documents filed in court, an FBI agent said, "I believe the messages and image ... reflect that Chris Kelly was using this account to inform associates that he had breached the Capitol and was inside."

The court document accompanying the charges included photos that the FBI said showed Kelly on the Capitol grounds, but they did not include any further indication that he entered the building.

Other riot cases have included data from cellphone service providers indicating that defendants' phones were inside the building. This case did not. Nor did it include any photos of Kelly himself inside the Capitol or offer any direct proof that he was among the rioters.

But photos and cell data showed he didn't

Charges were just dropped due to lack of evidence

What is going on here?https://t.co/IJ5RHCJoBV

Will this be the only case to be dismissed due to lack of evidence? Probably not. Scores of Trump supporters were in DC for the Save America Rally. Some folks did break off from that which led to the riot. It was not an armed insurrection; no cops were killed by the rioters. It’s not indicative of the 74+ million people who voted for Trump in 2020. It was not akin to Pearl Harbor or the 9/11 attacks. It was not a good day, but it was hardly this apocalyptic attack on our constitutional republic that the liberal media talks about pervasively. First, it was some $100,000 worth of Russian ads on Facebook that supposedly weakened our country because Hillary lost an election, and now this.

Keep an eye out for any other cases being dropped because the paid informant or the cell data straight up exonerates the defendant. Also, it’s funny how Democrats think no justice can be served without their commission into January 6 which is not a fact-finding mission but one to smear and attack Donald Trump again. Last time I checked; Joe Biden was sworn in as president weeks later. The country survived. The country moved on. And no one, except liberal newsrooms, cares about January 6.