The NYT Changed a Headline for One of their Op-eds About Anti-Semitism? Did You See the Original? 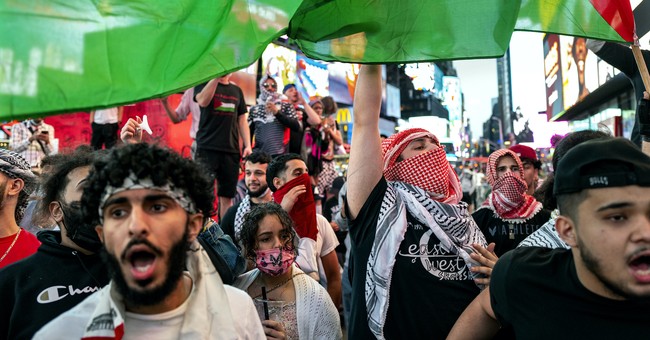 There’s been a spike in anti-Semitic hate crimes. Pro-Palestinian protesters are beating up Jewish people all over New York City. And there’s nothing in the liberal media about it. If Trump were in office, you bet anti-Semitism would be tied to him because the liberal media lies. And that is one helluva lie to sell which their braindead masses would consume with joy.

“I support Israel” might be an underreported phrase that triggers the Left to no end. Post that and watch what happens. It’s nasty. But what’s even worse is New York Times op-ed writers decrying anti-Semitic violence, not because violence is wrong, but because it helps conservatives. It’s a ‘gift’ to the Right, says Michelle Goldberg whose original headline was quietly erased with no explanation. Maybe it’s because we all noticed its awfulness.

‘Don’t attack Jewish people; it only helps the Right’ is apparently what some on the Left take away from this recent spate of violence (via NYT):

The @nytimes just wrote an editorial saying anti-Semitic attacks on Jews in America are a gift to the right. Seriously, this headline just happened. pic.twitter.com/nUyoNiUiDJ

Heck of a headline update by The New York Times.

Of course there is no explanation. pic.twitter.com/eSF5YP9haL

In Los Angeles, for example, a caravan waving Palestinian flags stopped near a sushi restaurant in West Hollywood, where men got out and attacked diners sitting outside. A witness recalled them asking, “Who’s Jewish?” In New York, a 29-year-old Jewish man on his way to a pro-Israel rally was beaten and pepper-sprayed by a group of men hurling anti-Semitic slurs. In southern Florida, men in an S.U.V. reportedly pelted a visiting Jewish family with garbage and shouted: “Free Palestine” and “We’re going to rape your daughter. We’re going to rape your wife.”

But this violence also threatens to undermine progress that’s been made in getting American politicians to take Palestinian rights more seriously. Right-wing Zionists and anti-Semitic anti-Zionists have something fundamental in common: Both conflate the Jewish people with the Israeli state. Israel’s government and its American allies benefit when they can shut down criticism of the country as anti-Semitic.

Many progressives, particularly progressive Jews, have worked hard to break this automatic identification and to open up space in the Democratic Party to denounce Israel’s entrenched occupation and human rights abuses. This wave of anti-Semitic violence will increase the difficulty of that work. The Zionist right claims that to assail Israel is to assail all Jews. Those who terrorize Jews out of rage at Israel seem to make their point for them.

Not surprisingly, there’s been a rush to blame left-wing Democrats like Ilhan Omar, who described Israeli airstrikes killing civilians in Gaza as “terrorism”…

It’s awful irony, but anti-Semitic violence helps shore up this system by strengthening the taboo against calling it what it is. I get the sense that some people on the left find talking about violence by Palestinian sympathizers embarrassing; it certainly doesn’t receive the same sort of attention as white nationalist attacks. But it should be treated as a crisis, both as a matter of basic human solidarity and because it’s a political danger.

Omar is an anti-Semite, so any piece defending her nonsense about this conflict raises red flags. The truth is that we need to stop viewing Hamas and Palestine as legitimate actors right now. Forget a two-state solution, there can be no discussion if Hamas continues to dominate the Palestinian political system. These people are genocidal terrorists. You cannot trust them. You cannot deal with them when their main aim to kill Jews and destroy Israel.

The ‘political danger’ is a red herring. This has always been dangerous if terrorists are in the room. Violence against Jews is wrong. Period. Damn the political ramifications. Maybe these attacks by pro-Palestinian clowns are a sign that maybe the other side is simply not reasonable and never have been. But if we’re going to talk about narratives here, the liberal media will never cover this as intensely as white nationalist violence, which is overblown, because the narrative doesn’t fit. They’re not white. They can’t pin this to Trump or white people. It’s why ‘Stop Asian Hate’ died a quick death because most of the perpetrators of such and hate crimes are black.

And beyond that, look at who CNN and BBC are hiring to cover the Israeli-Palestinian conflict? When you have reporters supporting Hitler, I’m fairly certain the coverage will be garbage and the attacks on Jews buried. Just a guess.