A School Bus Driver Attacked a Student Over a Mask. Here's What Happened Afterward. 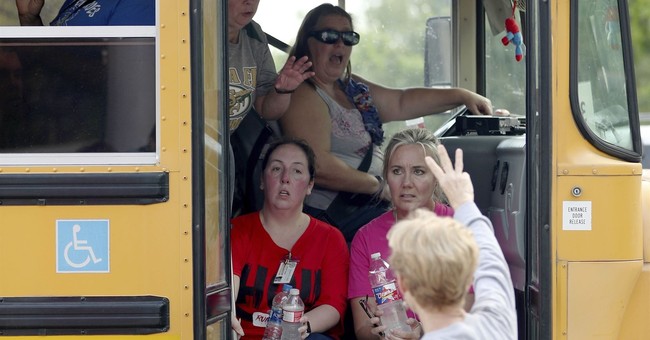 Well, this should be a prime example of how not to behave, especially when you’re tasked with transporting other people’s kids to school safely. A Colorado school bus driver was out of control when he assaulted a 10-year-old girl for not wearing her mask. The camera captures driver Bertram Jaquez slapping the child, which has led to criminal charges. The incident occurred in April, but Jaquez is now out of a job and facing assault and child abuse charges (via Fox News):

A Colorado school bus driver has been fired for "[striking] a child over the child not wearing a mask on the bus," the district tells Fox News.

The incident involving the Fremont County School District driver happened in mid-April and he has been charged with harassment, assault causing injury and child abuse, according to KKTV.

"Our school community is experiencing a very unfortunate situation. We have had a bus driver strike a child over the child not wearing a mask on the bus," the district told Fox News in a statement. "We believe it is never okay to lay a hand on a child."

Surveillance footage of the alleged incident obtained by KKTV begins with a male figure saying "Hey, both of you have to wear the mask" while he is seen trying to adjust one on a student’s face.

"Why?" a female student is then heard asking.

In a written statement to the district, the driver, identified as Bertram Jaquez, said "out of reaction, I slapped her once," KKTV reports.

Yeah, slapping kids as a school bus driver will get you fired at the very least. What is going on here? We’re assaulting kids over masks. Kids generally don’t catch COVID or spread it. If anything, they’re one of the safest demographics regarding COVID’s impact on the population. And if they do contract it, they don’t get all that sick from it. This guy deserved to lose his job and maybe spend a couple of days in jail.