Fill Up If You Can: Some Parts of the Country Already Experiencing Gas Shortages 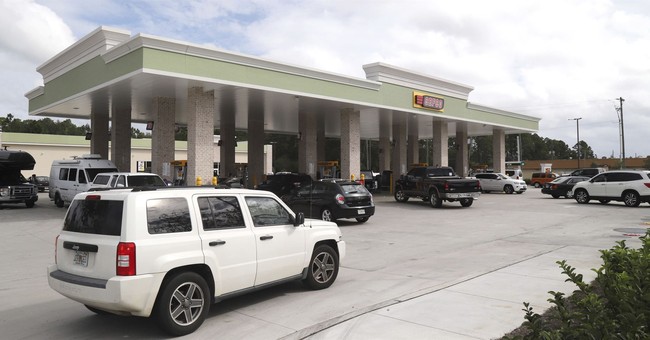 The Colonial Pipeline has been shut down. It was hit with ransomware by what appears to be a criminal syndicate from Russia. It got hacked. Has the company paid the ransom? It won’t say, but this 5,500-mile pipeline supplies 45 percent of all fuel to the eastern United States. So, yes, prices will spike, and shortages could be seen from Alabama north through Baltimore. And in some places, like Florida, North Carolina, and South Carolina, we’re seeing gas stations closing because they have no gas (via WEAR-TV):

State agencies and area gas stations say Monday that a local terminal failing to meet certain standards is partly to blame for the gas shortage in the Pensacola area.

Those stations who had gas -- like the Walmart on Mobile Highway -- had long lines of cars waiting to fuel up.

Colonial Pipeline was forced to shut down Friday after a ransomware attack. AAA says most of Florida's gas is shipped in, so the pipeline shutdown most likely won't affect local supplies. But it could still drive up prices.

However, the Florida Department of Agriculture said Monday afternoon that the Colonial Pipeline hack is one reason for the gas shortage, while a truck driver shortage is another.

This is crazy. I stopped for gas just now having no idea what was happening. It’s out. People here told me they’d been to other stations and found the same. pic.twitter.com/7LDVdUXPo4

This is the gas station across the street. Long line for gas. @WLOS_13 pic.twitter.com/mxaX7QU9a0

In light of the recent cybersecurity attack that temporarily shut down one of the largest pipelines in the United States, Governor Roy Cooper on Monday signed an Executive Order declaring a state of emergency in North Carolina. The order also temporarily suspends motor vehicle fuel regulations to ensure adequate fuel supply supplies throughout the state.

I would suggest filling up and not taking any unnecessary travel until the pipeline is operational again. Colonial hopes to have things up and running by the end of the week. That’s its goal. We’ll see what happens.