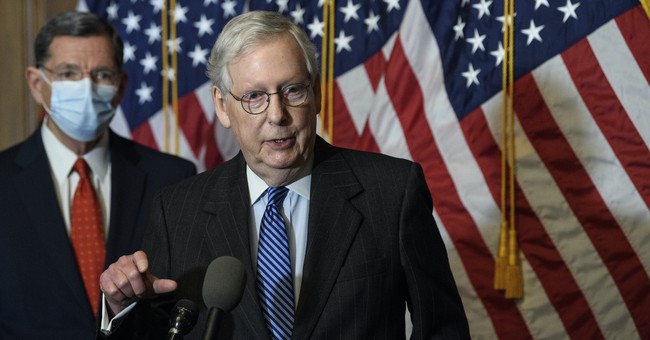 Look, Mitch McConnell has had his ups and downs. The Kentucky Republican was instrumental in enacting core parts of the Trump agenda. The total overhaul of the judiciary and getting three Trump Supreme Court nominees confirmed is key. His remarks and behavior during the Georgia runoff and after the January 6, Capitol Hill riot are a different story. His opposition to the $2,000 COVID relief checks cost Republican support. Granted, maybe Donald Trump could have attacked Democrats more during the runoff, but the reported behind-the-scenes antics he was doing after January 6 was also mind-numbingly stupid.

McConnell didn’t think the Democrats’ second impeachment push was political in nature, he wanted Trumpism purged from the party, and was floated to be a possible vote to convict. He was furious with Trump for costing the GOP the Senate. There was a lot of noise. And then, he had a "come to Jesus" moment, probably because he saw how the base views the former president.

Is there room for redemption? I think so. Unlike Liz Cheney, he did not vote to convict Trump. He’s also plotting to be the grim reaper for Biden’s agenda, seeking to inflict legislative death on Joe’s agenda. He’s unapologetic about it, which is an admirable characteristic about Mitch (via WSJ):

Senate Minority Leader Mitch McConnell said Republicans are united behind stopping President Biden’s agenda, putting a damper on already slim hopes for bipartisan cooperation in Congress ahead of more talks with the White House on a possible infrastructure deal.

“One hundred percent of my focus is standing up to this administration,” the Kentucky Republican said at a press conference in his home state Wednesday, in response to questions about infighting among House Republicans. “What we have in the United States Senate is total unity from Susan Collins to Ted Cruz in opposition to what the new Biden administration is trying to do to this country,” he said, referring to the senators from Maine and Texas.

Democrats passed a $1.9 trillion Covid-19 relief bill with no Republican support earlier this year and have proposed more than $4 trillion in additional spending on infrastructure, antipoverty and education proposals. Republicans have said they are willing to engage in talks on a narrow infrastructure plan focused on roads, bridges and broadband, and some GOP lawmakers outlined a $568 billion infrastructure framework. But they have rejected Mr. Biden’s more extensive spending plans.

Proposals supported by Mr. Biden on gun laws, voting rights and D.C. statehood have also drawn little GOP interest. They passed the House but are unlikely to progress in the Senate, where most legislation needs 60 votes to advance. Vice President Kamala Harris ’ tie-breaking vote gives Democrats a narrow majority in the chamber, which is split 50-50 between both parties.

Biden said he wasn’t buying the "kill everything" talk from Mitch, though there is one downside to McConnell’s bold declaration: history. In 2010, he promised to make Obama a one-term president. He failed. Then again, weak sauce Mitt Romney was our nominee that cycle. Still, we shall wish Mitch the best in this endeavor, thus completing the cycle of loving McConnell, hating McConnell, and then liking him again. It’s been this way since the rise of the Tea Party. It is what it is.