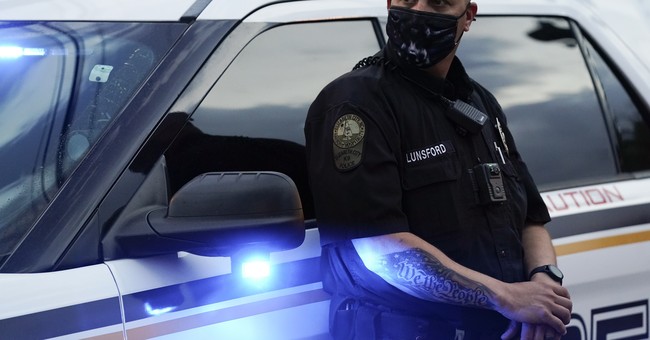 Remote learning has failed during the COVID quarantine era, but it has done well exposing some bats**t crazy teachers. It’s like ‘to catch a predator.’ We’re nabbing these lefty clowns in action, berating students for having their own opinions, not just kowtowing to their warped view of reality. At Cypress College in California, an adjunct professor was placed on leave for going at a student who gave law enforcement praise. How dare he call police “heroes.” That’s was caused this latest incident of triggering (via NY Post):

The unidentified Cypress College educator was apparently triggered Wednesday during 19-year-old business major Braden Ellis’s Zoom presentation on cancel culture in the US, in which he noted how even animated kids TV shows such as “Paw Patrol” have come under fire from unhinged cop-haters, Fox News reported.

“A lot of police officers have committed an atrocious crime and have gotten away with it and have never been convicted of any of it,” she declared during the verbal communications class, which was posted online and quickly went viral.

“We have bad people, and the people that do bad things should be brought to justice,” the student calmly responded. “I agree with that.”

“So what is your bottom line point?” the teacher demanded.

“You’re saying police officers should be revered, viewed as heroes? They belong on TV shows with children?”

Ellis answered: “I think they are heroes, in a sense, because they come to your need and help you.”

When Ellis asked the professor if she would call the police if she were in trouble, she insisted she would not.

Hey, she might think that calling the police is an act of white supremacy, which is the position the city council president of Minneapolis took last year.  The New York Post added that the professor also won’t be coming back even after her time on leave has expired. The college said, “the adjunct professor will be taking a leave of absence for the duration of her assignment at Cypress College. This was her first course at Cypress and she had previously indicated her intention to not return in the fall.”

Ellis isn’t naming the professor over privacy concerns. I don’t know, Mr. Ellis. I say torch her. What’s her name?