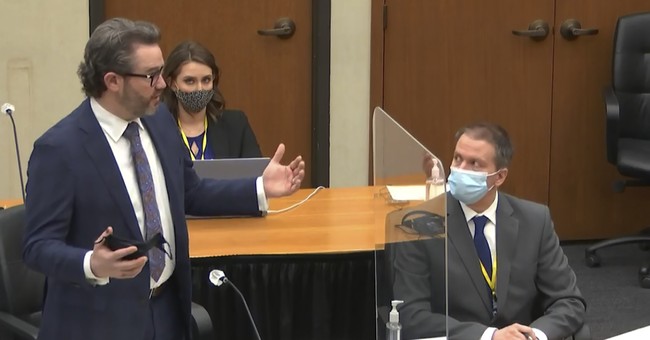 Former Minneapolis Police Officer Derek Chauvin has been found guilty on all counts. The verdict was reached a little after 10 hours of deliberation by the jury. The former cop at the center of the death of George Floyd which sparked a whole summer of riots last year was found guilty of second-degree murder, third-degree murder, and second-degree manslaughter. Sentencing is in eight weeks but as of now, he’ll most likely be spending the rest of his life in prison. Will there be an appeal? Yes. Was Chauvin overcharged? Sure. Was there jury intimidation with the local press pretty much doxxing members of the pool? Yes. That will be argued in due time. For now, Chauvin is slated to be handed down a very lengthy prison sentence.

Cities across the country were bracing for the verdict. National Guard was deployed. Businesses were boarded up. Everyone saw what happened last summer. This isn’t hard to put two-and-two together here. At CNN, they decided to reach into the X-files and say this was done because local authorities were possibly tipped off that Chauvin was going to be found innocent. This was from the network’s supposed chief legal analyst. This was before the verdict was read—and the network was tossing conspiracy theories. Curtis Houck at Newsbusters clipped this moment:

TIN FOIL HAT: CNN senior legal analyst Laura Coates suggests the boarding up of buildings and beefing up of security ahead of the verdict could be seen as proof local elected leaders and police received a heads up of what the verdict will be and it could be innocent. pic.twitter.com/jU9WQlxukb

You can file this under not helping.

Over at MSNBC, another network established to keep liberal blood pressures at healthy levels, some reporters there were not happy that Chauvin was found guilty on all accounts.

MSNBC's Jason Johnson is FURIOUS with the verdict, calling it "a cultural make-up call": "I'm not happy. I'm not pleased. I don't have any sense of satisfaction. I don't think this is the system working...This is the justice system trying to say, hey, this is one bad apple." pic.twitter.com/W3JLcujpfd