During Audiobook Recordings, Speaker Boehner Was Particularly Vicious Toward One GOP Senator 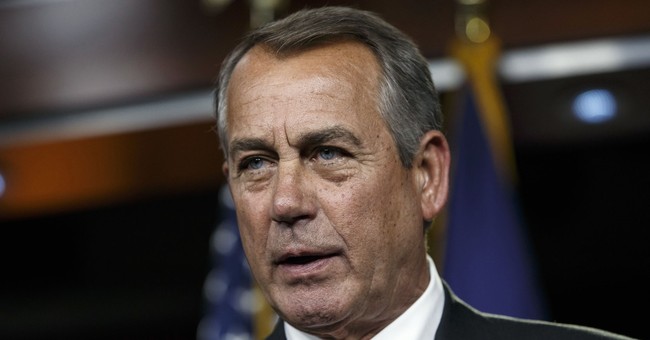 He may be long gone from the Hill, but John Boehner is back with his new book that I’m sure the liberal media will eat up. No, I’m not kidding. He torches the new GOP, so yes—CNN, MSNBC, and others will shower praise. Yet, there are some outtakes that are admittedly a bit funny. Jonathan Swan of Axios described that the recording sessions for his audiobook are “wine-soaked,” where the former House Speaker often goes off script, inserting violent attacks on Sen. Ted Cruz (R-TX). There are clips. Here’s one where he tells Cruz to “go f**k himself.”

The man is riding high, probably earning much more money in the private sector, and left after Pope Francis addressed Congress in 2015. Yet, while this a funny moment, I’m sure a host of Republicans are not going to like his lengthy attacks on today’s GOP and the media apparatus that supports it. Boehner is an old-school, Midwestern Republican. He’s just part of that establishment. I’m actually not shocked, but just brace yourselves for his attacks against some well-known conservative firebrands (via Axios):

When @SpeakerBoehner was recording his audiobook I was told by sources that during these wine-soaked sessions he would deviate from the book’s text and insert random violent attacks on @tedcruz. Well, here’s some tape (listen to the end): pic.twitter.com/NFCQ2QFdTT

The big picture: Boehner seeks to cast himself in his new memoir, titled “On the House: A Washington Memoir," as one of the last leaders of the GOP's sensible conservative movement, before the party was co-opted by Donald Trump and other members who dedicated themselves to "wedge issues and conspiracies and crusades

On Sean Hannity: "Places like Fox News were creating the wrong incentives. Sean Hannity was one of the worst. I’d known him for years, and we used to have a good relationship. But then he decided he felt like busting my ass every night on his show. ... At some point I called him a nut. Anyway, it’s safe to say our relationship never got any better."

On Roger Ailes: Boehner describes meeting with his old friend Ailes, who was ousted as CEO of Fox News in 2016 after sexual harassment allegations, "to plead with him to put a leash on some of the crazies he was putting on the air," telling Ailes that he was making his job harder.

"When I put it to him like that, he didn’t have much to say. But he did go on and on about the terrorist attack on the U.S. Embassy in Benghazi, which he thought was part of a grand conspiracy that led back to Hillary Clinton. Then he outlined elaborate plots by which George Soros and the Clintons and Obama (and whoever else came to mind) were trying to destroy him."

"'They’re monitoring me,' he assured me about the Obama White House. He told me he had a “safe room” built so he couldn’t be spied on."

On Ted Cruz: "By 2013 the chaos caucus in the House had built up their own power base thanks to fawning right-wing media and outrage-driven fundraising cash. And now they had a new head lunatic leading the way, who wasn’t even a House member. There is nothing more dangerous than a reckless asshole who thinks he is smarter than everyone else. Ladies and gentlemen, meet Senator Ted Cruz."

The counterpoint to all of this is that if the GOP of Boehner’s mold actually did what they campaigned on—maybe the base wouldn’t have wanted a total renovation of the party along more populist lines. It’s sort of hard to see why the so-called crazy people rise in the ranks quickly when the old school crew constantly disappointed for years. People wanted change and if it came with a side of lunatic, so be it. The far left on the Democratic side also has their lunatics. The GOP of the Boehner era campaigned hard that they would repeal Obamacare. They kept pushing that for nearly a decade. It never happened.

They were all talk, no action. And folks wonder why Donald Trump became such a force.