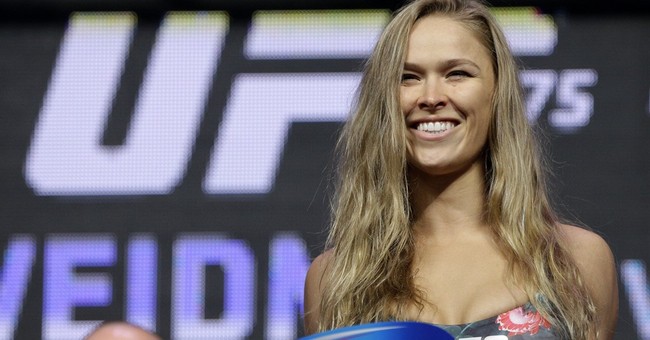 This week was Equal Pay Day, and I’m sure you were bombarded with a lot of lefty nonsense about why women are paid less than men in some professions. College-educated women are actually doing quite well, but that’s beside the point. This has been a top issue for liberal America. Now, there is some debate over this topic, but it quickly goes off the hinges given that the woke Left has entered the chat. The US women’s national team has been a key group pushing this issue of equal pay in sports. It makes sense why this team is quarterbacking the effort. It's an elite group. They’re back-to-back World Cup champions. They win—a lot. And Megan Rapinoe was there to tee off the discussion this week, littered with the usual lefty talking points  (via WaPo):

Megan Rapinoe took the U.S. women’s national soccer team’s battle for equal pay to the White House on Wednesday, declaring while on a stage with President Biden and first lady Jill Biden that, despite her enormous success with the team, “I have been devalued, I’ve been disrespected and dismissed because I am a woman.”

Speaking at an event marking Equal Pay Day, Rapinoe declared: “Despite all of the wins, I am still paid less than men who do the same job that I do. For each trophy — of which there are many — for each win, each tie and for each time that we play, it’s less.”

Rapinoe, who testified earlier in the day about gender discrimination at a hearing of the House Committee on Oversight and Reform, introduced President Biden as “one of our greatest allies.”

In his remarks, Biden spoke of how the coronavirus pandemic has exacerbated inequalities for women in the workplace, touted the benefits of the American Rescue Plan and called on Congress to pass the Paycheck Fairness Act.

Well, this wasn’t shocking at all. There’s loads of nuance with this issue, but that kills the narrative, so liberals obviously bypass it all. There’s a reason why it’s less, Megan. It’s revenue. Men’s sports right now just brings in more cash. Play more games, more friendlies, and the cash will flow. If not through the sport, it’ll come via endorsement deals. You have one with Visa. Let’s also not treat Megan as if she’s poor either. Most of the women who form the core of the US women’s national team are millionaires.

Also, not everyone buys into this narrative. In 2015, former mixed martial arts champion Ronda Rousey had a more grounded take on the pay issue:

"I think that how much you get paid should have something to do with how much money you bring in. I'm the highest paid fighter not because Dana wanted to do something nice for the ladies. They do it because I bring in the highest numbers."#EqualPayDay pic.twitter.com/R4b2ChbY2Z

This issue isn’t going away. There can be a discussion about it for sure; we shouldn’t be afraid to talk about it. As of now though, we might as well just focus on something else since it’s impossible to have a conversation with those on the woke Left. We’ll put our guns down when you do.