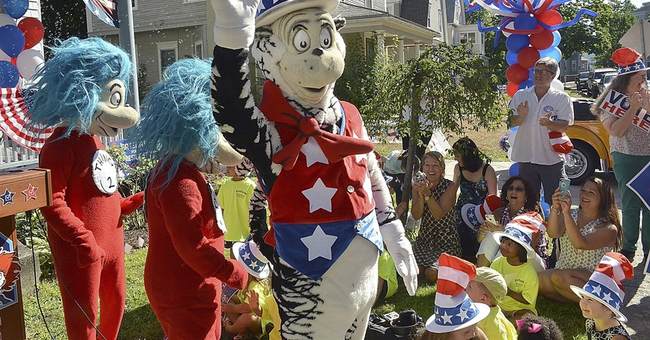 The annual Read Across America will be banning books in some parts of the country. Yes, you read that right. Is it Catcher in the Rye or The Adventures of Huckleberry Finn, some of the book burners' favorite targets? Nope. It’s Dr. Seuss. Yeah, that’s right. Green Eggs and Ham is racist, and the Cat in the Hat is really a member of the Nazi SS. In Loudon County, Virginia, the school district decided to nix Dr. Seuss in order to be more inclusive and to reflect the diverse community. Folks, these are fictional characters. What is going on (via Deadline):

The good Dr. Seuss, aka Theodor Geisel, has been dropped from the annual ‘Read Across America’ event, a national day to encourage reading. Dr. Seuss books have long been a staple of the program.

Dr. Seuss, a major supplier of content for television and film through such characters as The Grinch, the Cat in the Hat, and Horton Hears a Who, was banned because his books allegedly have “strong racial undertones,” according to the school system.

The Loudon County, Virginia schools said they will look toward books they believe are more “inclusive and diverse and reflective of our student community,” a spokesman said.

Yeah, The Atlantic Journal-Constitution has an op-ed about the racial undertones of Dr. Seuss’ imaginary worlds. Get some Advil ready:

In this guest column, Granger-Mbugua, a National Board Certified teacher and Spelman graduate, discusses whether Dr. Seuss books are appropriate for her son and other children, given the stereotyping and treatment of people of color in some of them. A 2019 study found only 2% of the Dr. Seuss human characters were people of color, and they were reduced to racist caricatures.

Little did I know, at the time, and honestly, even up until recently, the racist and damaging history of Dr. Seuss and his work, which included many famous children’s stories, illustrations, and minstrel shows. I am inclined to believe that the friend who gave me the book was also ignorant of the harmful and destructive stereotypes Seuss used.

Over the last few weeks, however, I have found myself learning about just how problematic Dr. Seuss and his books are, especially for children who are Black, Indigenous and people of color. Perhaps, I am more attentive now that my son is in elementary school and I want and expect his exposure to diverse and uplifting authors and stories to continue in the classroom. Perhaps, it is because our country is paying acute attention, in the wake of last summer’s social justice protests, to issues of injustice and systemic racism.

Liberalism is a mental disorder. First, I’m shocked that it took this long for the woke mob to go after Dr. Seuss, aka Theodor Seuss "Ted" Geisel, since he got his start drawing racist anti-Japanese cartoons. It was during World War II. It was in support of the war effort. Those were the times. Frankly, if there were a conservative case to cancel Seuss, though we should never do so, it would be for The Lorax; great story, but it’s also environmentalist propaganda. Jokes aside, these so-called controversies over Dr. Seuss are not new. It’s been known for years, but the good that has come from his works especially when it comes to getting youngsters to read outweighs any attributes some might find problematic, both real and imaginary.