Trump to Haley (Probably): Are You Serious Asking That of Me After What You've Just Said? 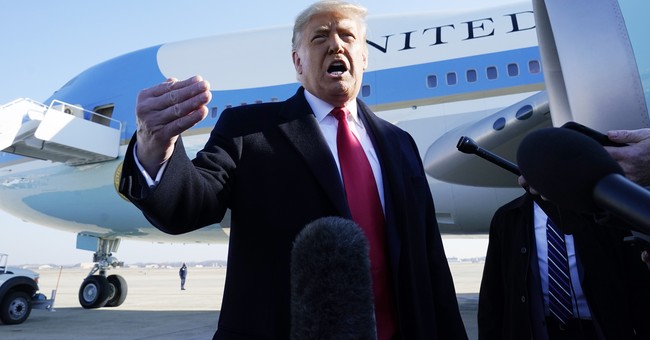 I still think it’s something of a Greek tragedy. Nikki Haley had the credentials to make a presidential run. She could have done the job as well. Her win would have secured the conservative movement the win in the culture war. And now, it’s over. It’s all over. The party base changed. The dynamics changed. Trump changed the party. And the base isn’t having any of it. Yes, she joined the Trump administration serving as our ambassador to the United Nations. It was a good gig. Then, she left, went into the bunker, and now resurfaces…to pretty much trash Trump during his second impeachment effort. Her lengthy interview in Politico with Tim Alberta, who is now off to The Atlantic, showed the very DC-infused way of threading the needle that the GOP base is sick of—big league. She says Trump let us down, he’s not viable anymore, but also says we can’t go back to the Romney-Ryan days of the GOP. Well, that only happened because Trump came onto the scene. Let’s revisit what she said:

But what if he does? Or at least, what if he spends the next four years threatening to? Can the Republican Party heal with Trump in the picture?

Yet, she also walks this waffled path of denouncing Trump, but also not wanting to go back to the days before he took over the party.

“I don’t think it should. I think what we need to do is take the good that he built, leave the bad that he did, and get back to a place where we can be a good, valuable, effective party. But at the same time, it’s bigger than the party. I hope our country can come together and figure out how we pull this back.” Haley added.

Well, she obviously noted that she struck a chord because she tried to get a meeting with Donald Trump at Mar-a-Lago and was turned down.

After you said those things, you expect to meet me? That’s probably what went through Trump’s mind—and I don’t blame him (via Politico):

NIKKI HALEY reached out to former President DONALD TRUMP on Wednesday to request a sit-down at Mar-a-Lago, but a source familiar tells Playbook that he turned her down. The two haven’t spoken since the insurrection on Jan. 6, when Haley blasted Trump for inciting his supporters to storm the Capitol.

The snub comes on the heels of Tim Alberta’s deep dive in POLITICO Magazine last week on Haley’s presidential ambitions and how she’s trying to have it both ways with Trump.

Our friends at Hot Air noted that Haley also tried to clear the air even more with an op-ed in The Wall Street Journal—but it again circles back to the ‘having it both ways’ criticism here. Twitchy was more brutal, noting many think Haley is ‘toast’ with Trump’s refusal to meet her. To reference one of my favorite shows, The Sopranos, this is akin to Tony Soprano refusing to have Ralph Cifaretto, one of his captains with whom he was having issues, over for Thanksgiving dinner. Spoiler alert: Soprano eventually kills Ralph.

If Haley can navigate this, mount a 2024 run, and be competitive, then we can circle back and offer mea culpas—but for now, it looks like her political bleeding has not been sutured properly yet.