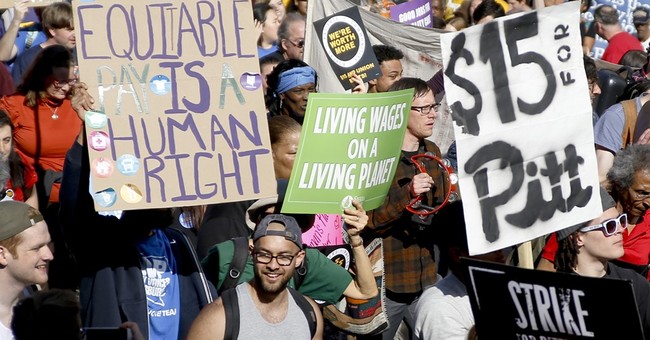 Sen. Joe Manchin (D-WV) wields a lot of power right about now. We’ve discussed this prior, but he and Sen. Kyrsten Sinema (D-AZ) are two Democrats who walk to the beat of their own drums and won’t really be swayed by Chuck Schumer. That goes double for Manchin. He hails from a conservative state. Schumer’s liberalism isn’t welcome there. In fact, the more times Manchin goes against the national Democratic Party, the better it is for his re-election chances. He’s already a reported target for a primary challenge from the progressive Left. The only thing I can say is good luck finding an Alexandria Ocasio-Cortez-like candidate in West Virginia who can win. Yet, Manchin's latest position on the minimum wage will surely infuriate the far left of the Democratic base. He’s a "no" vote on a minimum wage hike. Now, the reasoning isn’t what you’d think. He accounted for inflation, noting that it’ll be really just $11/hour, not $15 (via The Hill):

Sen. Joe Manchin (D-W.Va.) said Tuesday that he does not support increasing the minimum age to $15 an hour — a critical roadblock to including the proposal in the final coronavirus relief bill.

“No I’m not. I’m supportive of basically having something that’s responsible and reasonable," Manchin told The Hill, asked if he is supportive of a $15 per hour minimum wage.

Manchin added that for West Virginia, his home state, that would be $11 per hour, and adjusted to inflation.

Now, he did say he would move forward with the procedural vote which passed with all Democrats, but he’s still adamant that he’s against a $15 minimum wage hike — and that if this bill isn’t crafted in a bipartisan manner that addresses COVID, he could nuke it all:

Sen. Joe Manchin (D-W.Va.), a pivotal centrist swing vote, announced Tuesday he will vote to advance a Democratic budget resolution, while warning that he wants leadership to work with Republicans on a bipartisan COVID-19 relief package.

“I will vote to move forward with the budget process because we must address the urgency of the COVID-19 crisis. But let me be clear — these are words I shared with President Biden — our focus must be on the COVID-19 crisis and Americans who have been most impacted by this pandemic,” Manchin said in a statement released Tuesday afternoon.

Manchin on Tuesday also indicated what he does, and doesn't, want to see in a final relief measure.

“I will only support proposals that will get us through and end the pain of this pandemic. For the sake of the country, we must work together with laser focus to defeat the COVID-19 crisis, support our neighbors and communities who continue to suffer and get back to a more normal life as quickly as possible,” he said.

Manchin told reporters that he would not support raising the minimum wage to $15 an hour, a component of Biden’s proposal, saying he would instead prefer "having something that’s responsible and reasonable.”

Sen. Joe Manchin says he will not allow the filibuster to be broken in the upper chamber.

The Biden White House has already stepped in it with Manchin, sending Kamala Harris to do an interview at a local station without telling him. It was a move to pressure the senator on this bill that blew up in the face of this White House. Harris is a California liberal who hates coal and therefore the workers there. She referred to the coal mines as land mines. It was a massive misfire and not a smart play. Manchin is a key vote on anything relating to the budget reconciliation process. You cannot afford to lose him — and if you’re Joe Biden, this stunt only added pressure on Manchin to not work with you on anything. News bulletin, Kamala: you and your boss are not popular in West Virginia.