Why Myanmar Just Went Back to Its Military Dictatorship Days 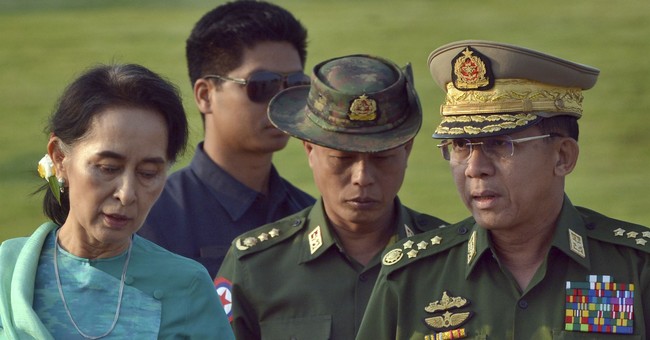 It’s not a nation that’s in the news a lot in the US. In fact, I’d be shocked if people could find Myanmar on the map. It’s just not talked about much. That’s all. But it’s a nation that was under the thumb of a military dictatorship for years and finally ceded ground to a democratically elected civilian government in 2011—sort of. The military still remained in key positions of power. Still, the Obama administration and others lauded the effort. Yeah, they also said that Yemen was the blueprint for future counterterrorism operations in the region just before the nation collapsed into civil war. Remember this is the Obama administration’s foreign policy, one that was painfully predictable in its fecklessness and one that often-left nations in ruins in its wake. So, the Obama folks said Myanmar’s democratic efforts were worthy of fairy tale praise. That’s usually the harbinger of disaster. In this case, it took a few years, but alas—disaster has struck. Over the weekend, a military coup took place (via NYT):

Myanmar’s military launched a coup on Monday, detaining the country’s civilian leader, Daw Aung San Suu Kyi, and her top lieutenants in early morning raids and seizing power from a government established only five years ago.

Officials from the National League for Democracy, Ms. Aung San Suu Kyi’s party, confirmed the detentions on Monday morning. Hours later, with politicians and activists alike racing to find out who had been detained, a military television network announced a one-year state of emergency with ultimate authority transferred to the army chief, Senior Gen. Min Aung Hlaing.

Mobile networks and the internet were down in major cities in Myanmar, and some local journalists went into hiding for fear that their reporting could compromise their safety. Domestic flights were suspended, and the main international airport in Yangon, the largest city in Myanmar, had been shuttered, according to residents.

Myanmar had been celebrated as a rare case in which generals willingly handed over some power to civilians, honoring 2015 election results that ushered into office the National League for Democracy.

As it began its political evolution, Myanmar was lauded by Western governments, including the Obama administration, as a democratic beacon in a world where authoritarianism was on the rise. But the political transition in the Southeast Asian nation was never quite as smooth or as significant as the political fairy tale made it out to be.

The army, which began a political transition toward what it called, confusingly, “discipline-flourishing democracy” in 2011, made sure to keep significant power for itself. One quarter of Parliament is filled by men in military uniforms. Key ministries are under army control. And in the chaotic years of early democratization, fire sales of state assets often ended up with military companies or their proxies capturing the choicest prizes.

The latest turmoil was ostensibly provoked by concerns about fraud in the November elections, which delivered an even bigger landslide to the National League for Democracy than the party enjoyed five years earlier. The governing party secured 396 out of 476 seats in Parliament, while the military’s proxy party, the Union Solidarity and Development Party, managed just 33.

The Union Solidarity and Development Party cried foul, as did political parties representing hundreds of thousands of ethnic minorities who were disenfranchised shortly before the vote because the areas where they lived were supposedly too gripped by strife for elections to take place. Rohingya Muslims were also unable to cast their ballots.

But few in Myanmar believed that the detentions on Monday, which netted top National League for Democracy officials, were made only over concerns over electoral fraud. Worries that the military might intervene started in October, when the vote was canceled in some of the ethnic minority areas.

The New York Times said the Obama folks had joined the chorus calling Myanmar’s transition “a democratic beacon in a world where authoritarianism was on the rise.” Yeah, that didn’t last long. And sadly, if the media does bring this up, the only reason why is so we can have endless liberal commentators go on unhinged tantrums about the 2020 election and Trump. How we dodged a bullet because of the January 6 fiasco on the Hill and the handful of National Guardsmen, tasked with protecting the US Capitol days afterward, being removed from protective duty because they held conservative beliefs. That’s not evidence of an insider attack. There was never any evidence or intelligence pointing that this could happen, but the January 6 event was exploited by the media to its fullest extent.