Biden Press Secretary Jen Psaki Promises Transparency...She Has an Interesting History About That 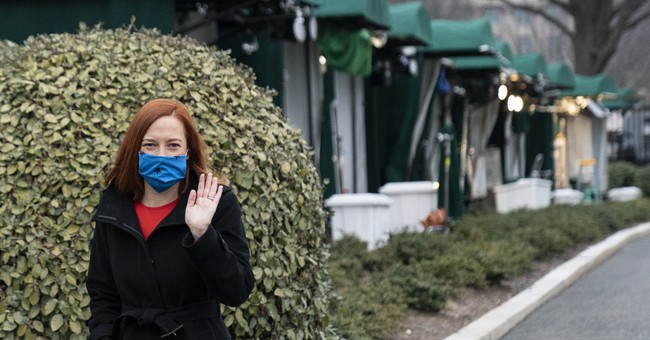 Last night, the Biden White House had its first press briefing. It was a lot of sucking up for sure, but there were a couple of decent questions. For the most part, as it was during Obama’s tenure in the Oval Office, it’ll be cupcake treatment. There will be no pushback. There will be confrontations. It’ll be a boring routine. Remember a Democrat is now president. The liberal media’s president is now in charge. They can’t be too hard on Biden.

New White House Press Secretary Jen Psaki promised transparency, but that declaration was not without some raised eyebrows among those in conservative media, specifically Philip Klein of the Washington Examiner.

Jen Psaki, one of the leaders in the Obama administration's disinfo campaign on Iran deal, opens by talking about importance of communicating truthfully.

They don’t get the attention like the White House, but that statement takes us down memory lane when Psaki was the mouthpiece for the Obama State Department. A question about secret talks with Iran was brought up in 2013, which led to someone intentionally cutting several minutes of that exchange which featured Psaki. Nowadays, if this had happened under Trump, it would be a weeks-long story about deception in the White House. The error was initially said to be a “glitch,” but State was forced to admit that someone tried to bury the footage. This admission occurred three years later as the Obama administration was making its preparation for the exit (via WaPo):

The State Department acknowledged Wednesday that someone in its public affairs bureau made a “deliberate” request that several minutes of tape be cut from the video of a 2013 press briefing in which a reporter asked if the administration had lied about secret talks with Iran.

The embarrassing admission by State Department spokesman John Kirby came three weeks after another spokesperson insisted that a “glitch” had caused the gap, discovered only last month by the reporter whose questioning had mysteriously disappeared.

“This wasn’t a technical glitch, this was a deliberate step to excise the video,” Kirby told reporters.

The curious gap in an old video of a public briefing is not of the same ilk as the famous 18  1/2- minute gap in audio tapes of President Nixon’s Oval Office conversations during the Watergate coverup. The official written transcript of the State Department briefing always carried the full exchange.

But it is likely to further fuel controversy over the administration’s nuclear deal with Iran, coming amid allegations that the White House duped the press and misled Congress and foreign policy scholars about the Iran nuclear deal that was implemented in January [2016].

The missing portion of the video came to light in early May when James Rosen of Fox News was preparing a report on White House communications advisor Ben Rhodes, who had boasted to a New York Times Magazine reporter of having created an “echo chamber” to market the Iran nuclear deal and undermine criticisms from opponents. The magazine story said the White House portrayed it as a result of a moderate being elected president of Iran in 2013, when in fact secret talks had been underway since 2011.

The publication added that then-Fox News reporter James Rosen asked about secret talks twice in 2013. In February, Victoria Nuland denied secret talks were occurring with Iran. That December, Psaki, who took over from Nuland said, “I think there are times where diplomacy needs privacy in order to progress. This is a good example of that.”

I do like how the Post made sure to say this was nothing like the Nixon Tapes. They’re right. It might be worse. In both instances, someone deliberately tried to mess with something relating to the public record. The Iran issues dealt with national security directly. I don’t know—it sounds pretty bad. But it’s Obama—that’s what makes it different.

Be skeptical of the calls for unity from this administration and of transparency in the press room, but you already know that.