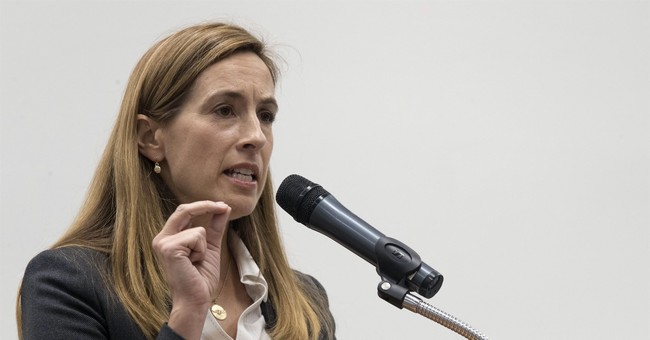 Rep. Mikie Sherrill (D-NJ) lobbed a serious accusation against Republican members of Congress, saying that some members gave “reconnaissance” tours to those who stormed the US Capitol last week. On the day of the incident, both chambers of Congress had convened on January 6 to certify the 2020 Election College results. Mayhem then ensued as scores of Trump supporters broke into the Capitol Building. Five people died. Sherill’s accusation has not been backed up with evidence. She has not provided photographs, names, or much of anything. She’s pouring gasoline on this fire, but our friends at Twitchy might have zeroed in on what caused her to hurl this heinous accusation.

There’s a photograph of Rep. Lauren Boebert (R-CO) with some folks who took a guided tour and were later caught in the rioting. Ron Filipowski, a Republican who is now a Democrat, tweeted and then deleted the post for obvious reasons. It’s wrong.

A reverse image search showed that this photo is from 2019.https://t.co/6q2ITYTT6A https://t.co/WNSyBhG7Rd

“This is a photo that Member of Congress Lauren Boebert posted on her Instagram page on Jan 5. This is the group she then took on a guided tour of the Capitol after this photo was taken. These people participated in the insurrection the following day. At least one has been charged,” he wrote in the now-deleted post.

The problem is that the photograph is from 2019. Sherrill also hasn’t said if she was referencing to Boebert as well. So, thus far, this appears to be ‘the evidence’ regarding this accusation—and it’s totally false. Maybe. Just maybe the Democrats aren’t interested in unity at all, right? Of course, they’re not. And for an incident where mostly everyone agrees was wrong and a fiasco, we have Democrats hurling inside job conspiracy theories.