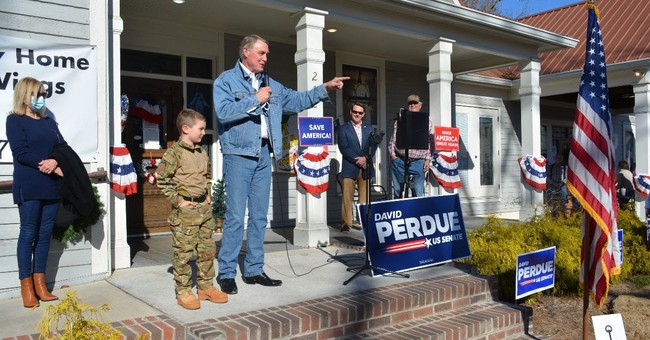 We’re five days away from the key Georgia Senate runoffs, and Sen. David Perdue is heading into quarantine. His final get-out-the-vote operation is over after being possibly exposed to someone with COVID. A campaign staffer tested positive, so he’s taking the proper precautions (via NBC News):

Sen. David Perdue, R-Ga., will start to quarantine after someone on his re-election team tested positive for Covid-19, his campaign said in a statement on Thursday.

The move will force him to miss crucial time on the campaign trail just days ahead of his Tuesday runoff against Jon Ossoff.

"This morning, Senator Perdue was notified that he came into close contact with someone on the campaign who tested positive for COVID-19," the spokesperson said in a statement.

"Both Senator Perdue and his wife tested negative today, but following his doctor's recommendations and in accordance with CDC guidelines, they will quarantine. The Senator and his wife have been tested regularly throughout the campaign, and the team will continue to follow CDC guidelines.

Sen. Perdue in quarantine after possible COVID exposure. GA runoff is in 5 days.

These elections will decide who controls the US Senate. Sen. Kelly Loeffler is the other Republican running for a full-term. She was appointed by Gov. Brian Kemp to serve the remainder of Sen. Johnny Isakson’s term. Isakson resigned for health reasons in December of 2019. He was diagnosed with Parkinson’s Disease in 2015. Given the dynamics of the race, I don’t see a situation where we can split a win here. Perdue and Loeffler will either sink or swim together. Frankly, it should just be Loeffler running. Perdue beat Ossoff but failed to clinch over 50 percent. He won his race. Perdue did that. And I’m sure it would have been the same for Loeffler if Rep. Doug Collins had dropped out to avoid a GOP vote split in that race. Frankly, I’m more of a Collins fan, but the voters decided here.

Circling back, a part of me is just annoyed at this whole system. Again, Perdue won his race. This runoff dynamic is just ridiculous. Whoever gets the most votes in these contests should be declared the winner. That’s a pretty simple standard. Now, I know given the results of the Loeffler-Warnock-Collins race, Warnock got the most votes, but we all know if Collins had decided to bow out to avoid a split, Kelly would’ve won. Collins may have been aggressive against Kelly in the election, but she’s certainly better than any Democrat. Anyway, that’s not how things are in Georgia. We have a runoff soon and it should be another tense night as we count the ballots.

We’ll find out soon enough if this nation will render Biden a caretaker president with a GOP firewall in the Senate, or whether Schumer will be allowed to nuke the legislative filibuster and ram through the most radical left-wing items in the Democrats’ agenda. Republicans here are still sour over the 2020 presidential results and rightfully so. We have allegations of fraud that are not going away in the minds of these voters. There was funny business, but it was not argued effectively in the courts. Whatever the case, it doesn’t matter. The lawfare in the 2020 election is over. This election is now, and Georgia Republicans should do everything they can to ensure Loeffler and Perdue remain in Washington.

Biden took the presidency. Fine. Make sure you hogtie him with a GOP Senate would be my mindset. Also, the House Democratic majority has very little room to mess around with the pie-in-the-sky lefty dreams of the Squad, so we’ll probably be able to tread water until 2022 where we can hopefully retake the House. Maybe start those congressional probes into 2020 election fraud or Hunter Biden. I don’t know. We’re not there yet.