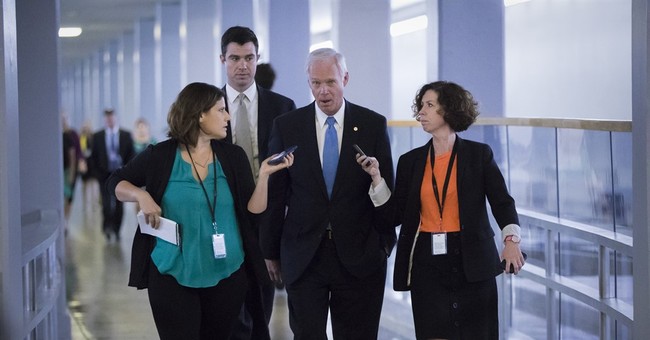 We still have ballots to count. We have some to re-verify. We have legal challenges. We have allegations of voter fraud. And President Trump has yet to officially concede. And yet, the news media has already called it for Joe Biden. No doubt, Team Trump is in Hail Mary territory, but if the standard is ‘wait until all the votes are counted’, then that’s what I’m going to do. Let the legal challenges play out.

Maybe that’s why Sen. Ron Johnson was so blunt regarding his answer to a question from a reporter about whether he congratulated Joe Biden or not. Or it could be the sign of the hyper-partisanship that is to follow no matter who wins this race.

Reporter: "Senator, have you congratulated Vice President Biden yet?"

Johnson: "Nothing to congratulate him about." pic.twitter.com/Is7APE2frx

Republicans on Capitol Hill continue to argue that the election results aren't over yet, and many haven't put out statements recognizing Biden won.

Asked if he congratulated Joe Biden, Republican Sen. Ron Johnson said “no,” there’s “nothing to congratulate him about.”

When asked if he had congratulated Biden, Johnson said, “no.”

When pressed as to why not, the Wisconsin Republican said, there was “nothing to congratulate him about.”

Yeah, that’s the right answer, and it's making the usual suspects very angry:

Sen. Ron Johnson (R-Moscow) is still a massive piece of shit that we will kick out of office in two years. https://t.co/5XgQqZgSWH

Sen. Ron Johnson (R-Wis.), who said he has “nothing to congratulate” Biden for, must figure members of his base are so ignorant and irrational that they will think better of him if he practices election denialhttps://t.co/f7e4cIoVg9