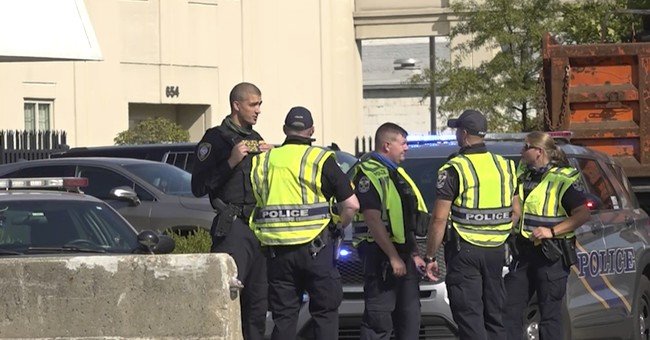 Well, if you back the blue, pray for them tonight. The country is about to undergo another wave of leftist mayhem, this time over the grand jury announcement in the Breonna Taylor case. Taylor was killed in March as police executed a no-knock warrant; her ex-boyfriend was under suspicion of being part of a drug ring. That was the initial story. The no-knock aspect was debunked today.

Kentucky Attorney General Daniel Cameron says that the officers did announce themselves before breaching the door while executing a search warrant that ended in the shooting death of Breonna Taylor pic.twitter.com/roAJQpiXQv

No narcotics or drug money were found in the apartment. Her ex-boyfriend was not there. Taylor’s death along with the officer-involved fatality of George Floyd in Minneapolis set off the summer of rioting that as of now is the costliest in American history. Prior to today’s announcement, Louisville police had canceled all time off, as officers prepared for rioting. Barricades have been set up as well. The city is bracing for the worst.

Cortney wrote that only one officer was indicted on first-degree wanton endangerment charges. No murder charges were brought forward. Our own Julio Rosas is on the ground covering the announcement in Louisville and to no one’s surprise, activists are not happy.

On the ground in Louisville, Ky. for @townhallcom and the protesting crowd just heard the charges the grand jury announced for the Breonna Taylor case. They are not happy at all, some people are crying. pic.twitter.com/DwGcYKyha4

Law enforcement is going to need all the help they can get, which is why the Kentucky National Guard has been activated:

National Guard units have also been activated in Illinois too. Things could get crazy tonight.

Editor’s Note: Got Taylor’s boyfriends mixed up regarding the search warrant. Apologies for the error folks.