It's Official: Trump Gets the WH Budget Czar That Democrats Hate 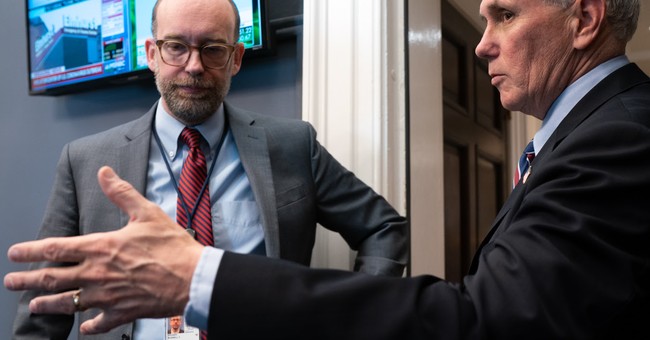 Well, it’s official. Last night, the Senate confirmed Russell Vought as the new director for the White House Office of Management and Budget. He’s been the acting director since March. Of course, Democrats hate him. He had a role in the failed Trump-Ukraine impeachment fiasco that ended in total defeat for the Democrats. He dared to cut social programs, boosted funds for defense, and—gasp!—wanted more tax cuts. Oh, the humanity! Yet, we all know why Democrats threw a tantrum. Trump nominated him (via WSJ):

Democrats had voiced strong opposition to the choice of Mr. Vought to head the agency, citing questions about his role in holding up U.S. security aid to Ukraine and his crafting of White House budgets that prioritized spending and tax cuts.

Mr. Vought aroused the ire of Democrats in January, when he released a $4.8 trillion budget that proposed steep reductions in social-safety-net programs and foreign aid and higher outlays for defense and veterans. In May, his office broke the longstanding practice of issuing updated economic forecasts, citing uncertainty caused by the coronavirus pandemic.

Mr. Vought has served in high-level positions at OMB since early in Mr. Trump’s presidency. He previously worked at Heritage Action for America, the lobbying arm of the conservative Washington think tank. Vice President Mike Pence cast a tie-breaking vote for the Senate to confirm Mr. Vought’s 2018 nomination as deputy director.

It’s a double-edged sword. Yes, it’s a once-in-a-lifetime honor to be nominated by the president to do a job, yet it also paints a target on your back for Democrats and their ‘woke’ allies in the liberal media who are no longer queasy about doxxing their enemies. Congratulations to Mr. Vought, the fact that Democrats hate you makes me root for you even harder.