The Dixie Chicks Finally Cave to the Political Correctness Mob...And Were Dunked On Again 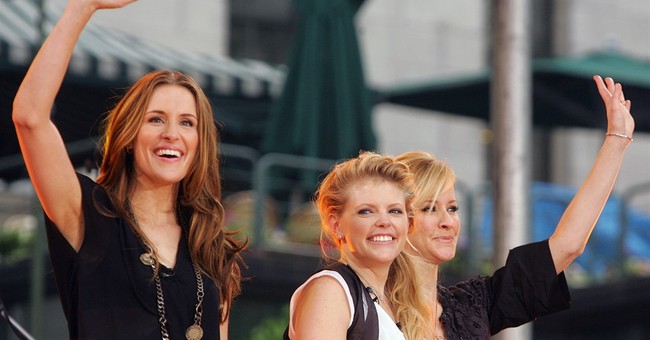 Well, this was bound to happen. With the lefty mob ripping down statutes and vandalizing what they consider to be problematic historical monuments, The Dixie Chicks as a band name could not go on. Look, I don’t really care for their music; they trashed George W. Bush when I was growing up—screw them. Yet, I’m not for this rush by everyone to hide under the bed to avoid the political correctness mob. And even then, it’s been a nightmare. Lady Antebellum changed their name to “Lady A,” but still got trashed for stealing the name of a black blues artist who originally performed under the same namefor years. The point is that you should never ever cave to the PC mob. But alas, here we are, and The Dixie Chicks are no more. They’re now just The Chicks (via Pitchfork):

Dixie Chicks are changing their name.The trio will go forward as The Chicks. The band revealed the change with the branding for its new song “March March.” The Chicks have also amended the cover of their comeback album Gaslighter to reflect the new name. In addition, the band’s social media pages now refer to the trio as The Chicks. Watch the new “March March” video below.

When reached by Pitchfork, a representative for the Chicks shared the following statement from the band:

A sincere and heartfelt thank you goes out to “The Chicks” of NZ for their gracious gesture in allowing us to share their name. We are honored to co-exist together in the world with these exceptionally talented sisters.

Yeah, this name changed was mocked as well…for being sexist.

“Chicks” is derogatory and demeaning to women. Terrible.

I see they decided that going the "Lady Antebellum" route by shortening it to "Lady A" wouldn't work quite so well with their band name. https://t.co/G73sVDY9rt

once they find out that "chick" can be used as a pejorative term towards women, they'll change their name to "The" https://t.co/bT0OGRYiGh

But seriously, we have fruit snacks making moves to avoid being torched by the mob. Aunt Jemima and Uncle Ben’s Rice are rebranding. It’s out of control. And if you think this mob will stop with these brands and Confederate statues, think again. This is about a total and complete erasure and overhaul of everything that offends them.