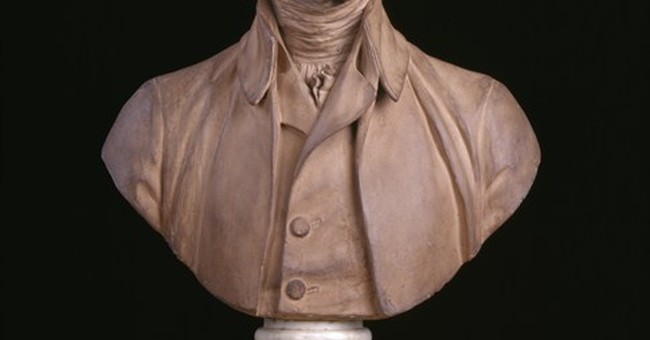 Well, you knew this was coming. No, it already has given that some clowns in Portland destroyed a statue to Thomas Jefferson, one of our Founding Fathers. He also happens to be one of our greatest presidents, but that’s beside the point, I guess. He’s the principal author of the Declaration of Independence, Founding Father, and former president, and we’re not going to have statues of this man. These left-wingers are funny. Truly—they’re funny except we can no longer afford to laugh at their games. This cancerous horde, the most insane being the ‘woke’ acolytes who have now graduated college, are extending the reach of this unruly mob. They want to destroy our history, re-writing it through some paradigm of political correctness. It’s an Americanized version of Mao’s Cultural Revolution. It’s scary. And the George Floyd riots have led to yet another wave of this statue nonsense, which doesn’t stop with Confederate monuments. You all know this.

And now, the statue to Jefferson that’s in City Hall is facing calls to be torn down. The speaker for the Council of the City of New York, along with a few other members, penned a letter to Mayor Bill de Blasio calling for its removal:

Speaker of NYC Council and other council members calling for removal of Thomas Jefferson statue from chambers in City Hall.

“The statue of this well-known slave owner is a reminder of the injustices that have plagued communities of color since the inception of our country.”

In the last few weeks, New Yorkers have called on all of us in elected office to make bold change so that communities of color feel heard, protected and represented. The City Council is committed to creating true reforms to policies and policing that hurt Black New Yorkers.

But that is not enough. There are disturbing images of divisiveness and racism in our City that need to be revisited immediately. That starts with City Hall.

The statue of Thomas Jefferson in the City Council Chambers is inappropriate and serves as a constant reminder of the injustices that have plagued communities of color since the inception of our country. It must be removed.

Jefferson is America’s most noted slave holder, a man who owned more than 600 Black women and men and a scholar who maintained that Blacks were inferior to whites.

The City Council Chambers is a place where we vote on bills to improve the lives of all New Yorkers and build a more fair and just city. It is not a suitable place for a statue of Thomas Jefferson. Keeping it in City Hall sends a terrible message to the people who are counting on us to work towards a more equitable New York City.

We urge you to support our efforts as we go to the design commission to expeditiously remove this statue.

Is this done to placate the left-wing mob or the incessant and insufferable whining of the American liberal that is never happy with America, always looking for ways to trash it, and amped to change anything, no matter how insignificant, and make it seem like it’s the issue of our day? It’s a statue. Quit sniffing glue. And again, with no grasp of history, the city’s left-wing loons have taken this position not knowing that New York City was named after a slave trader, one of the biggest of all-time actually, James, the Duke of York. Long story short, he was king for a bit but was deposed in the Glorious Revolution as his Catholic roots freaked out Protestant England. His religion really didn’t cause much of an issue until his son, James Francis Edward, was born. Sorry, the point is that he and his brother, Charles II, were the key persons in the Royal African Company which shipped over 200,000 slaved to the Americas. Charles II captured New Amsterdam in 1664 and renamed it, New York, after James. So, the Big Apple is named after a horrible slave trader. Maybe it’s time to tear it all down. The Federalist’s Sean Davis dropped this history lesson. So, when do we get to firebomb NYC? These are the Left’s rules—arbitrary, historically illiterate, and peddled by morons.

New York City was named in honor of the man who founded the Royal African Company, a British slave-trading monopoly, which "shipped more African slaves to the Americas than any other institution in the history of the Atlantic slave trade." https://t.co/SwcbhGdtSo