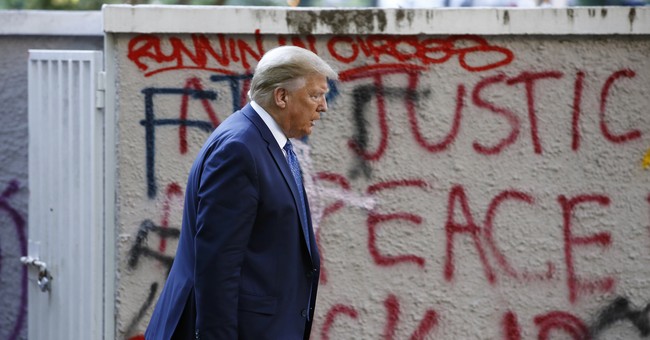 President Trump delivered an address in the Rose Garden last night before he took the ballsy step of leaving the protective perimeter around the White House to visit St. John's Church, the church of the presidents. Both the speech and his brief visit were to convey one thing: law and order will be returned. Civilian and federal resources will be mobilized to quell the unrest. He promised justice for George Floyd and said that the peaceful protesters won't be drowned out by an unhinged lefty mob who is committing arson, vandalism, and theft across the country. Trump labeled their actions as acts of domestic terrorism. The president urged governors to activate their National Guard units, dominate the streets, and re-establish order after a week of riots and chaos. He also said that if they fail to get this situation under control, he might deploy the military to put the mob down. That's a big "if," but it didn't stop CNN and the rest of the liberal media from having a total meltdown over the declaration.

My fellow Americans - My first and highest duty as President is to defend our great Country and the American People. I swore an oath to uphold the laws of our Nation -- and that is exactly what I will do… pic.twitter.com/pvFxxi9BTR

Leave it to these clowns to think that rioting, chaos, and looting are legitimate means of expression for social change. No one wants this, but there are endless segments of these folks excusing the rioters. Don Lemon had a complete mental breakdown:

Oh, and it's racist or something to call these rioters thugs, but liberals have short memories. Very short memories. As progressive reporter Michael Tracey, who has made enemies on both sides of the river due to him being unafraid to shoot inside the ship when the Left goes haywire, noted that Obama called the Freddie Gray rioters "thugs" and supported deploying the National Guard to deal with the unrest back in 2015 (via McClatchy):

Obama decried as “criminals and thugs” those who looted stores and torched vehicles in the city after the funeral service for an African-American man [Freddie Gray] who died of spinal cord injuries a week after an encounter with police.

But he said the nation – not just police departments – need to address what he said were problems rooted in decades of poverty and lack of opportunity in too many American communities.

Was this an act of martial law then? Tracey asked. No. No, it wasn't, but "orange man…bad" is the current mindset for the anti-Trump media. What else is new?

Did people forget that Barack Obama condemned rioters and supported the deployment of National Guard to quell civil unrest on multiple occasions? Was that “fascism” or “martial law” ...?

Floyd died at the hands of the Minneapolis Police after being arrested for the nonviolent crime of allegedly using a fake $20 at an establishment. He was unarmed. He was handcuffed, but Officer Derek Chauvin kept his knee on the back of Floyd's neck as he lay prone for nearly ten minutes. Floyd can be heard crying out that he couldn't breathe. He died as a result. There should be protests. This was an atrocity and complete disproportionate use of force. Yet, support for protests goes out the window when homes are burned to the ground, small businesses are looted, and cops are being run over.