Is This Why the Judge Presiding Over the Flynn Case Is Allowing Amicus Briefs from Anti-Trump Lawyers? 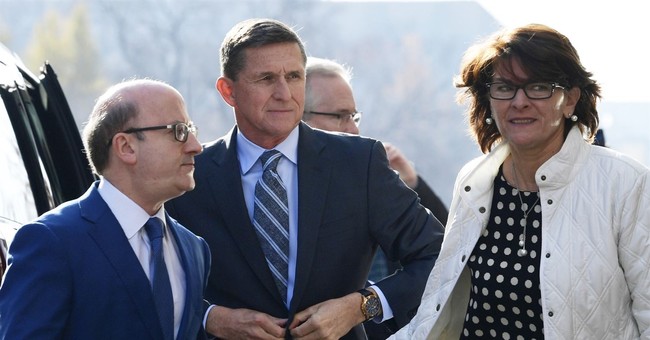 Justice for Michael Flynn has hit another snag. Judge Emmet Sullivan is ensuring that every method to legally slow down this case is utilized. I mean, there is no case. No one has opposed the motion to dismiss the charges lobbed against Flynn, who pleaded guilty to politically motivated “lying to the FBI” charges. The ex-national security adviser for President Trump was forced to plead guilty after the government threatened him and his family with financial ruin. Alas, new documents show that Flynn was the victim of an entrapment plot from the FBI’s top brass. James Comey was out to get Flynn by any means necessary. There was no basis to interview Flynn regarding the bureau’s counterintelligence probe into Russian collusion. There was no basis for him to be interviewed for any federal investigation; they had no evidence. Still, Flynn was interviewed by agents who said they didn’t think he lied to them. Comey didn’t care. He wanted a scalp, and now that dirty cop operation has been exposed. The Department of Justice filed a motion to drop the case. No party involved has opposed it. And yet, Judge Sullivan refused to drop the case and proceeded to invite the entire anti-Trump legal apparatus to file amicus briefs against the DOJ’s motion. The New York Sun’seditorial board has an idea for why Sullivan is doing this, which The Wall Street Journal cited in their op-ed. Sullivan is playing for time for a Democrat to win the 2020 election and then have a Biden DOJ drop the motion to dismiss the charges against Flynn. It’s speculation but given the breadth of the anti-Trump deep state and how far they will go to attack this White House, nothing is too crazy to consider. Remember it was nuts to think that Flynn was the victim of an FBI plot [emphasis mine]:

The decision of a United States judge to stall America’s motion to drop its case against General Michael Flynn appears calculated to delay the matter until after November. That’s how it looks, at least to us, in the wake of the judge’s decision to invite outside parties to file friend-of-the court briefs on what to do next. Could it be that the judge hopes the Democrats will win the election and, come January, drop the motion to drop the case?

In offering that line of speculation — and that’s all it is — we do not intend to question the integrity of the judge, Emmet Sullivan. We see as long-overdue and courageous Attorney General Barr’s decision to move to dismiss the case against General Flynn. The judge, though, has had a long and distinguished career on the bench. He was elevated to his several judgeships by Presidents Reagan, George Bush ’41, and Clinton.

Nor was it was ever, in our view, a foregone conclusion that the judge would grant America’s motion to end the case against the general, even if the betting around the courthouse is that the judge, in the long run, has few options but to grant the motion. After all, there is no longer an actual case or controversy, which is the only thing the Constitution grants the courts the power to decide.

Note, though, our caveat “in the long run.” What Judge Sullivan did today was issue a written order saying the court “anticipates that individuals and organizations will seek leave of the Court to file amicus curiae briefs” in the case. He must have been reading the op-ed pages. His order is practically an engraved invitation to the entire industry devoted to destroying the Trump presidency to pile on against the general.

The Wall Street Journal also commented on Sullivan’s actions, who now has appointed a retired judge, John Gleeson, to review the DOJ’s motion and look into whether Flynn could be charged, with get this—perjury. This was a sideshow attraction and now the circus has come to town. With such damning evidence of prosecutorial misconduct, the publication said Sullivan’s actions were disappointing for a judge who upheld a strong Brady standard, as should all members of the bench:

A U.S. judge has sought advice on whether President Trump's former national security adviser Michael Flynn should be held in contempt of court, signaling reluctance to let the Justice Department drop its case against Flynn https://t.co/gnkJah0ay4 pic.twitter.com/JgCD6P27yN

If the prosecution and defense both want to drop a case, can a federal judge refuse and sentence the defendant anyway? The easy call should be no, which makes all the more bizarre federal Judge Emmet Sullivan’s decision Tuesday to invite outside briefs in the Michael Flynn case.

This is a criminal case subject to normal rules of evidence that were clearly violated by Mr. Mueller’s prosecutorial team. Our friends at the New York Sun speculate that Judge Sullivan may want to keep the prosecution going for months so a Biden Justice Department could revive it. We hope that’s wrong, though we do recall that Judge Sullivan some months back in open court asked prosecutors if Mr. Flynn might have been charged with “treason.”

One issue here is the role of a judge in the U.S. system, which is to adjudicate cases and controversies, not to supplant the prosecutorial duty of the executive branch. There’s also the matter of simple fairness. Mr. Flynn has endured three years of public trial because he was caught up in the Russia collusion allegations that turned out to be based on nothing more than Russian disinformation.

Liberal lawyer Jonathan Turley found this move by the judge “unnerving,” given the documented evidence of DOJ overreach:

Judge Sullivan has now appointed a retired judge to look into “whether the Court should issue an Order to Show Cause why Mr. Flynn should not be held in criminal contempt for perjury.” Thus, the court is not only considering denying an uncontested motion for dismissal but...

...but considering a new charge based on Flynn's effort to withdraw his plea. Consider the implications for many cases where defendants seek to withdraw pleas due to prosecutorial abuse. It would create a threat of a judicial charge even when prosecutors agree with defendants.

Judge Sullivan was previously criticized for suggesting that Flynn could be charged with treason. He is now allowing third parties to make arguments in a criminal case on an unopposed motion. In addition, he is exploring a charge that he might be able to bring against Flynn...

...These extraordinary moves by the court are increasingly discomforting. This is a single charge where significant jail time was neither warranted nor expected. The Court's effort to import arguments and explore new charges could be raised on appeal given the prior record...

...there comes a point where the Court appears too invested in the punishment of a defendant and too active in creating alternatives to dismissal. As a criminal defense attorney, I find these moves unnerving, particularly when prosecutorial abuse has been raised by DOJ and others

And Flynn a clear victim continues to wait for final vindication. It’s terrible. The man was crucified for doing his job and making phone calls, but he worked for Trump which painted a target on his back.