Clown Show: Flynn Was Never Charged With Perjury, But Now Could Be Facing Charges...of Perjury 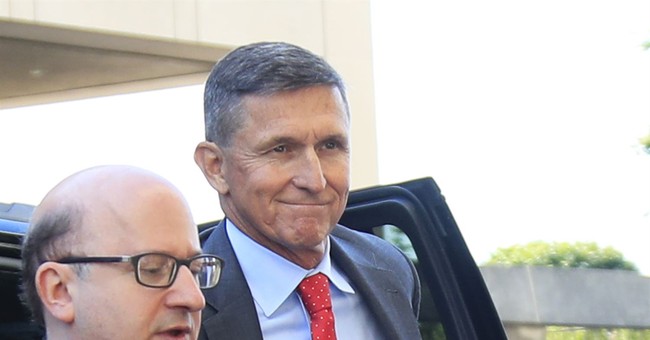 Ex-National Security Adviser Michael Flynn’s war with the government isn’t over just yet. He scored a decisive win, with the Department of Justice filing a motion to dismiss the bogus “lying to the FBI” charges against him. Charges that were politically motivated, part of an elaborate and expansive FBI plot to entrap the former top Trump official. James Comey and Andrew McCabe were out to get Flynn no matter the cost. Department policy and the Constitution be damned; they were going to him. Flynn was the target of the FBI’s counterintelligence probe into Russian collusion because he spoke with the Russians…because that’s what incoming national security advisers do. That’s their job. In the end, there was no evidence of collusion—nothing. There was no evidence to even target Flynn in a counterintelligence probe. And yet, the anti-Trump elements at the DOJ proceeded anyway. The FBI was running amok.

Now, even as Flynn is closer to total and complete victory, the judge presiding over the case, Judge Emmet Sullivan, a Clinton-era appointee, is gumming up the works. As Beth wrote last night, he’s allowing amicus briefs to be filed from the most viciously anti-Trump elements in our legal system in opposition to the DOJ motion.

The judge in Flynn's case just appointed a retired judge appointed by Bill Clinton to argue *against* dismissing the corrupt case against Flynn. Note that the motion to dismiss the case is unopposed by all parties to the case.

Emmet G. Sullivan is as corrupt as Comey's FBI. pic.twitter.com/sZ2X2FF0VP

Part of the "Watergate Prosecutors" group who filed a brief opposing the DOJ motion to dismiss is Jill Wine-Banks.

Ms. Wine-Banks is a Trump/Russia collusion nutter who claimed General Flynn would get "immunity for kidnapping"

"Mueller can prove conspiracy with Russia beyond any doubt."

These are the people Judge Sullivan will listen to. pic.twitter.com/6Pv54lOPLy

Flynn Update - @SidneyPowell1 responds to the idea of allowing let outside briefing on the DOJ motion to dismiss.

"The proposed amicus brief has no place in this Court."

"No further delay should be tolerated or any further expense caused to him and his defense." pic.twitter.com/ISDJoqljjp

Looking at the docket entries (#201 not present), we suspect an amicus brief has already been filed.

Perhaps by the former DOJ employees who want Sullivan to improperly proceed to sentencing.

Judge Sullivan risks turning this into a circus. pic.twitter.com/hJpxForsdS

Seems to say a lot about Judge Sullivan's motives.

Even his amicus is biased. pic.twitter.com/egaMGgEPAk

The latest move is even more absurd: Sullivan has appointed a retired judge to oppose the DOJ’s motion while also looking to see if Flynn, who was never charged or plead guilty to perjury, could be charged with…perjury (via WaPo):

Michael Flynn’s sentencing judge Wednesday asked a former federal judge to explore whether Trump’s former national security adviser should face a contempt hearing for perjury after he pleaded guilty to a crime for which he now claims to be innocent.

U.S. District Judge Emmet Sullivan also asked retired New York federal Judge John Gleeson to make a nonbinding recommendation whether to order Flynn, who pleaded guilty to a crime and now claims innocence, to explain why he should not be found in criminal contempt for lying under oath in his guilty plea.

Sullivan’s request to Gleeson comes one day after Sullivan had put on hold the Justice Department’s bid to drop charges against Flynn, saying he expects independent groups and legal experts to argue against the move.

“The Court exercises its inherent authority to appoint The Honorable John Gleeson (Ret.) as amicus curiae to present arguments in opposition to the government’s Motion to Dismiss,” Sullivan wrote in a two-page order.

It’s madness. The Federalist’s Sean Davis noted something interesting, which is that this guy, Gleeson, is being appointed to argue against the motion to dismiss, even though all parties agree it's time to move on from this fiasco. There is no crime and now there’s no prosecutor. So, what’s an anti-Trumper got to do? Well, continue to pervert the rule of law it would seem. The Wall Street Journal editorial board has an excellent piece to wrap this up, noting the anti-Trump clowns who will have their time to shine, while providing a requiem for a judge who historically made sure the prosecution turned over all Brady materials in his court:

Judge Sullivan refused to grant the Justice Department’s request to drop the prosecution, and thus Mr. Flynn’s guilty plea, after Justice discovered that exculpatory evidence had been denied to the defense. The judge invited comment from people outside the case, which amounts to the de facto outsourcing of the prosecution to partisan legal analysts who want Mr. Flynn to hang because he worked for President Trump.

One such band calls itself the Watergate Prosecutors, who include Nick Akerman. When Donald Trump Jr. released emails relating to a meeting with a Russian lawyer at Trump Tower, Mr. Akerman declared him guilty of “outright treason.” As special counsel Robert Mueller’s report showed, that Trump Tower meeting amounted to nothing.

Judge Sullivan doesn’t normally ask others to write his decisions, so what’s the point in this case? This isn’t a Supreme Court argument seeking competing points of view. The competition here is between defense and prosecution, and they both now agree.

The path to serving justice for Mr. Flynn and maintaining Judge Sullivan’s reputation for holding prosecutors accountable all point to a ruling that drops all charges against Mr. Flynn—with prejudice, so this travesty of a case is ended once and for all.

This won’t happen. Instead, we need to go another several rounds with the most unhinged anti-Trump elements in the country. And they’re lawyers, which means their arrogance will be nauseating. Yet, I’m fairly confident this will be another in-kind contribution to the 2020 Trump re-election campaign.

Sullivan is driven by an unhinged personal hatred of Flynn, as evidenced by Sullivan’s courtroom slur of Flynn, a decorated combat veteran who spent three decades in the military, as a traitor who “sold out” his country. https://t.co/hkjUjdaa9g

It turns out that Flynn amicus John Gleeson once worked with (and allegedly supervised) Mueller prosecutor Andrew Weissmann.

Curious if Gleeson and Weissman have talked recently. https://t.co/IDITqYjxXe